In Which the Boy Learns to Wield a Spray Paint Can.

You may remember this: 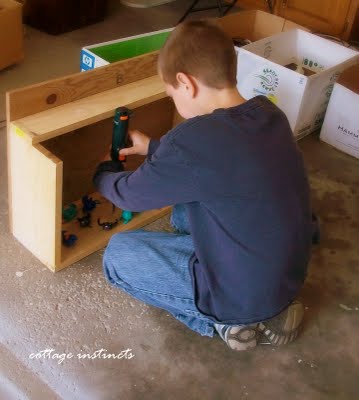 Well, today he decided his masterpiece needed some paint.  He described what he wanted, a mish-mash of colors to match his backugan guys.  But he didn't want it to look like a 'blob' of color.  More like "what a little kid would paint".  Um, yeah.  So we picked out some spray paint colors, I tied up the control monster, and let him have at it.

After I spray-primed and did some sanding,  I showed him how to use a can of magic....otherwise known as SPRAY PAINT.  He did some practice shots on the back, then went to town on the front: 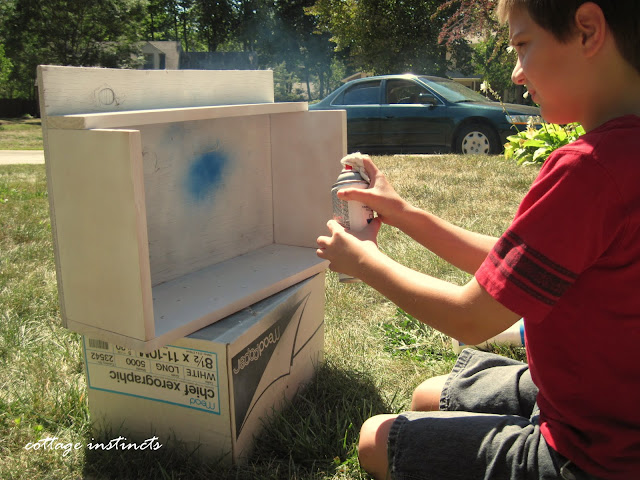 But quickly decided it was getting in his eyes and mouth....so I was a good mom and relented.  I gave him some protective gear.  *sheesh* Kids these days. 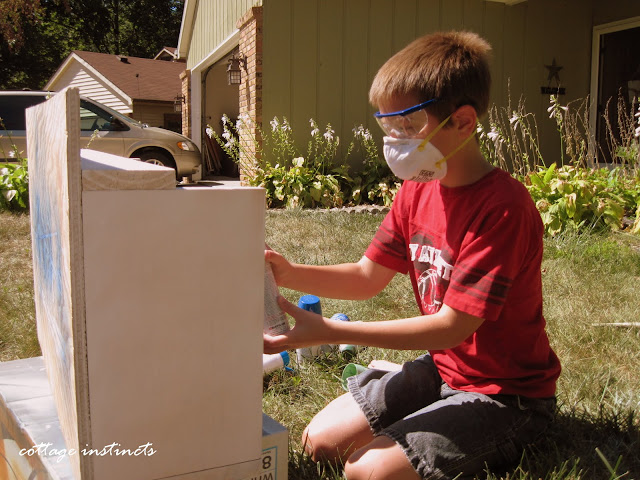 He started with some blue, then laid on some green: 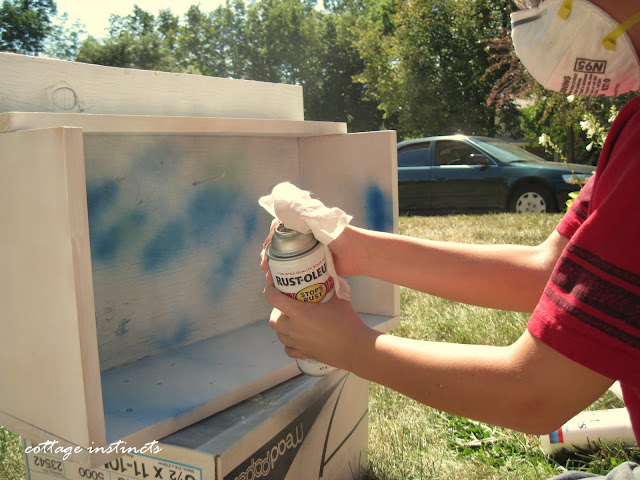 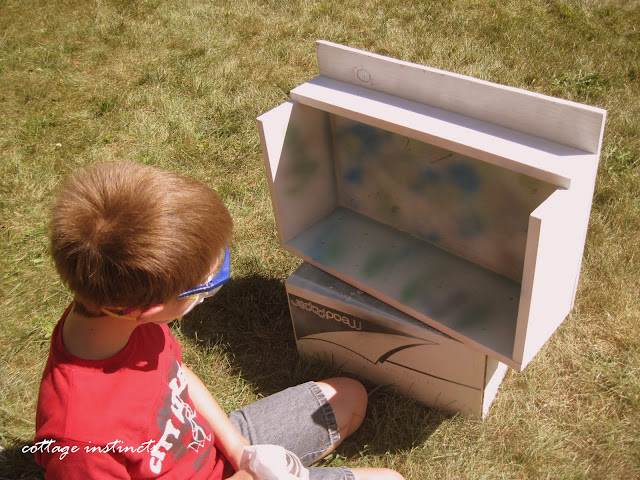 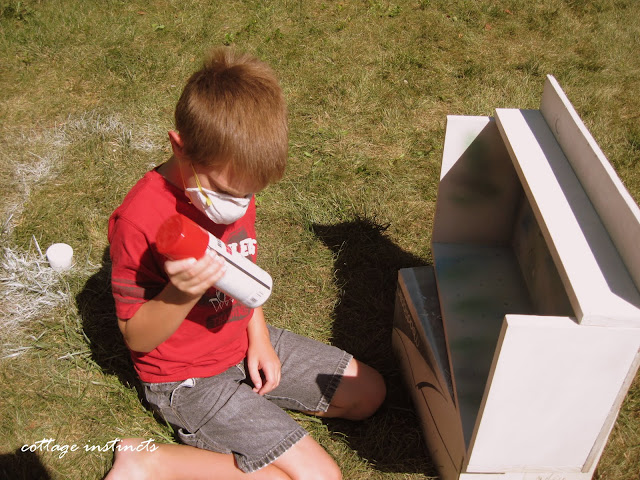 "Even more?  Can I be done shaking now?  This is taking a thousand hours....."  BTW, you don't see the spray painted grass.  I never spray paint grass.  Never.  Nope. 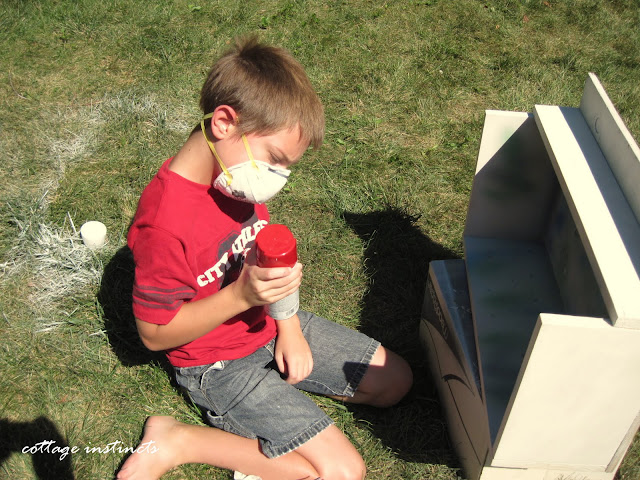 Is that lookin' cool or what? 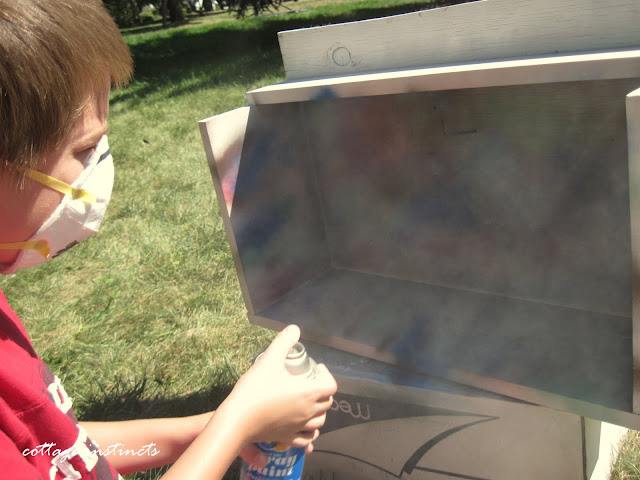 After a few more colors, he considers it done.  I told him to stand back and take a look: 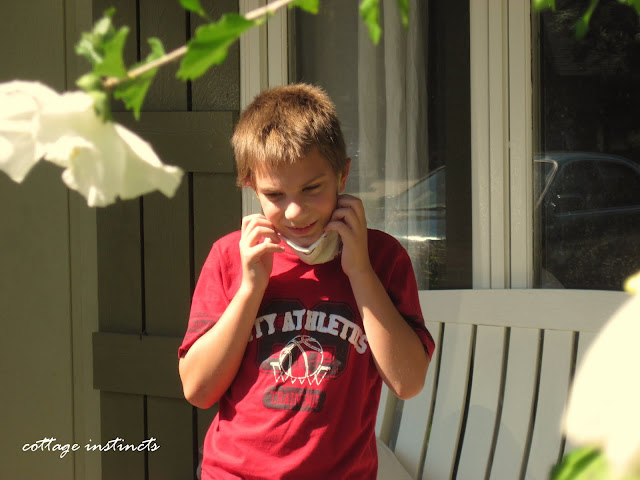 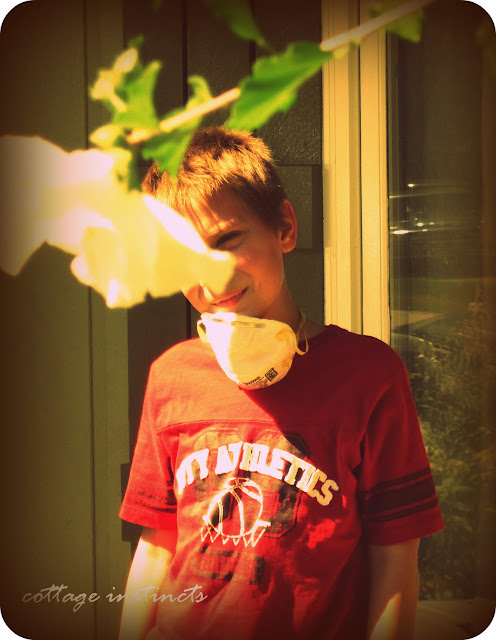 He asked me to use silver paint around the edges and stencil in red "BACKUGAN" on top, so we're off to the store for some more paint.  I'll show you the finished project when it's done.  I may even spell Backugan correctly.  Perhaps.

PS.  My boy just came in, took a look over my shoulder as I was typing this post up and said, "I knew it!  You had that camera out there just so you could put me on your blog!"  But methinks he dost protest too much.  He loves the attention.  Just like his mama.

Email ThisBlogThis!Share to TwitterShare to FacebookShare to Pinterest
Labels: Getting Crafty, The Cottage Family

Oh he is fabulous and what a great project. Isn't it fun when they get involved in doing crafts. I know he is proud and he should be. Great job. Hugs, Marty

Well, you should be proud of him. Not only is he good looking he has great talent. I love what he did with all the different paint colors. Great work. sandi

What a cutie he is, Cindy! And he did a great job...maybe you'll have spray painting help in the future!

Good for you, mama! It's such a neat and special thing to make kids happy. Kelly

ooh so nice so mother so son!!
i love it!!
Your bed is so beautiful!
and the project of your son zo colourfull!! nice
i wish you a verry nice weekend
Yolanda

He's a cutie, and he has an eye for color!

Beware though! You may have just created a monster! Now he'll want to spray paint EVERYTHING!

Oh goodness! Another one joins the spray paint generation!!

Cindy- Oh No! You realize now that you have created a Spray Paint Monster, right? Yes, indeedy! He will find things to paint that you never realized needed painting. He will be a Spray Painter Extraordinaire!

I can't wait to see it done...uh...one suggestion...maybe you could give the kid some vinyl gloves to protect his fingers instead of a rag? Ha! I'll just bet you have used them all yourself...haven't you?

I can't wait to see the finished piece. Don't you love it when kids get so excited over something as simple as spray painting something? The next thing you know he will be doing overpasses!>) Diana

As a regular reader of your blog, I wanted to let you know about Atticmag's new linky party - Giveaway Friday! It's a convenient place for bloggers to link their giveaways each week. We've kicked it off with a fantastic giveaway of our own. Five lucky winners will win material to do a backsplash in their homes. Hope to see you there!

Oh that control monster - I'm so glad you tied it down. I have a hard time corralling mine! You've inspired me to let it go. It's so fun to see your kids get creative.

How adorable is he! What a good boy!
Have a pretty day!
Kristin

Awesome! Let go and let the kids spray paint. I'm gonna have to see if I can find my 'control monster' off button. ;).

Great job to you and your son!

OMG that is awesome. I love it. I can't wait to teach my kiddos my spray painting ways. Good for you for protecting his lungs and giving him the proper gear.