The Coop Keeper part 2: The food, The Squirrel, and more food. 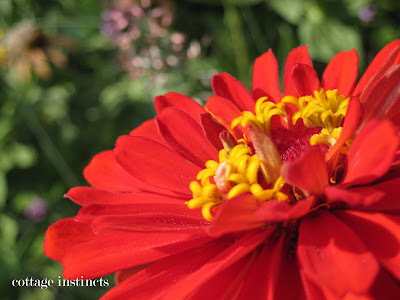 In pondering my mini-vacation to Jayme's, trying to organize in my pea brain how to write a coherent post or two about my experience there, I am struck over and over by what a magical place it is.  She has definitely got the whole 'follow your instincts' thing down.  The atmosphere there exudes peace, comfort, love.  And bacon.

To say I was relaxed there would be an understatement of the grandest proportions.  Here's where you can read Part 1 of my trip report.

This post will highlight some more of our activities.  There will be food mentioned.  Another understatement of the grandest proportions.

I arrived just before lunch on Saturday, so after a tour of the gardens, a welcome from the girls (and Buddy), we decided to head to downtown Crown Point for a little small town atmosphere. 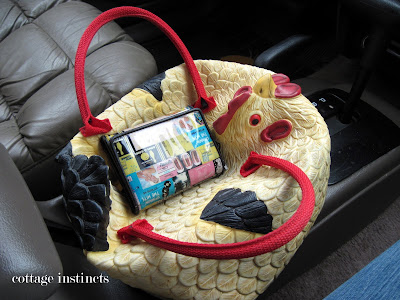 She had a couple errands to run, so I got to meet some of her friends too.  Let me just tell you Jayme is a rock star in her circle of friends.  She endears herself to everyone she meets.  I felt like a Coop Keeper groupie.....

Upon reaching the town square, we promptly planted ourselves in the winding line for one of Madalyn's Coney Style Hot Dogs. 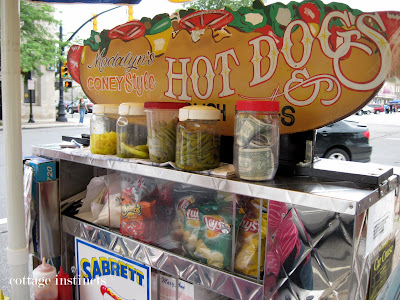 This dear lady sets up her stand each day and serves THE most delicious dogs EVAH.  Pickled asparagus?  Cucumber relish?  Yes, they. were. incredible.  Jayme says she's tried to 'retire', but her fans won't let her.  Here she works her magic: 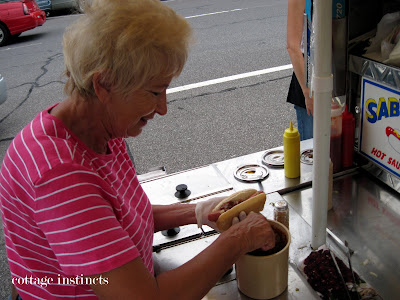 We walked thru the courthouse to see the shops in the basement where the jail cells used to be, and promptly decided there are no loos for females there.  Fail.

We also went to a thrift store, which was having a $5 bag sale, and we stuffed one full of clothes.  Then went to the cutest little shop owned by yet more of Jayme's friends and had some amazing gelato.  Cause what's better than an All-American Hot Dog with Italian Gelato for dessert?  Come on now.

We headed back, sat our weary behinds in The Squirrel, and gabbed about life.  I'll have you know that we solved all the world's problems.  Which made us late getting supper for her sis Cindy and That Boy Aaron. 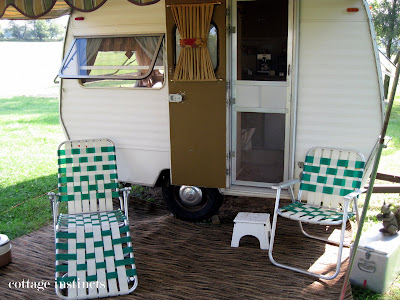 So we headed for the Tastee Top.  I have no idea why it's named that, nor why there is a gigantic plastic condom ice cream cone hanging from the ceiling. 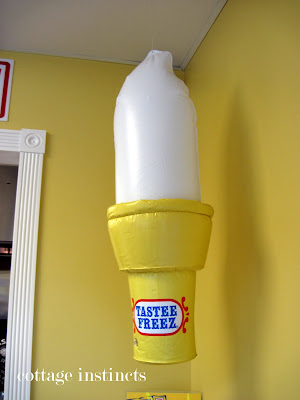 I will say they have a marvelous menu of transfat items served up with a smile.  And their freezes/shakes are wicked delish.

Back home again, we talked about curriculum for Aaron's freshman year, and then Jayme prepared The Squirrel for my night time zzzzz's.  She threw on quilts and fluffy pillows and lit candles.  Falling asleep like that with the crickets and bullfrogs and locusts was pure bliss, I tell ya.  I awoke, as I mentioned yesterday to Buddy's crowing at 4am.  Then 5am.  Then 6am.  At which time I took these pictures...the beauty took my breath away.  Which made me yawn. 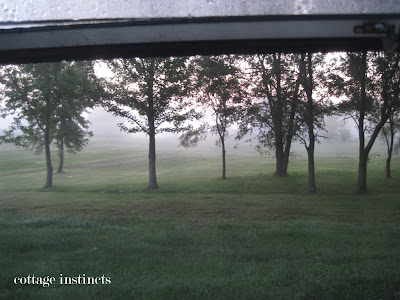 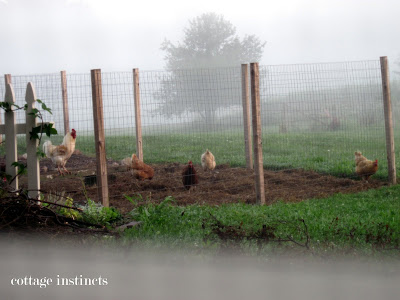 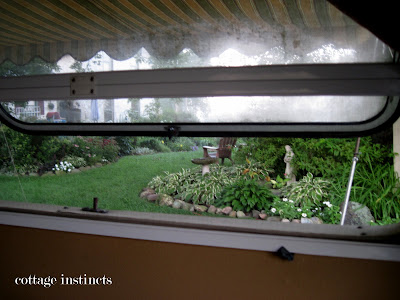 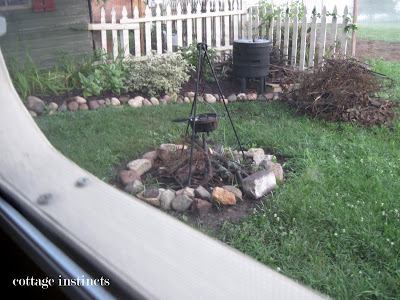 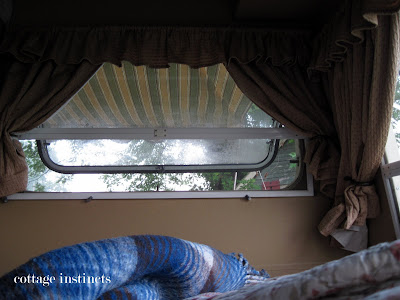 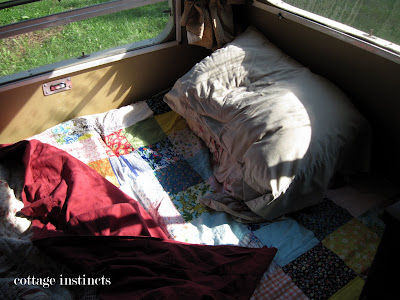 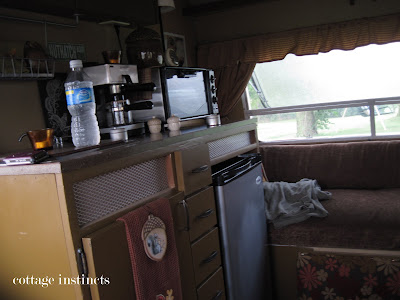 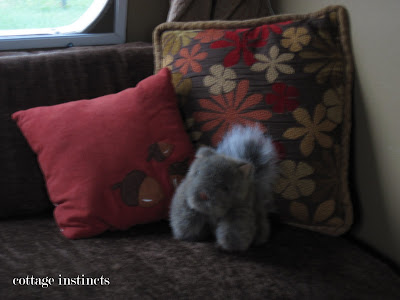 Well hello there.  Aren't I just the movie star first thing in the morn'?  I promptly crashed after this shot and slept for another 3+ hours, since Buddy had gotten enough action at this point.  Jayme and Glenco afeared I weren't never gonna git up. 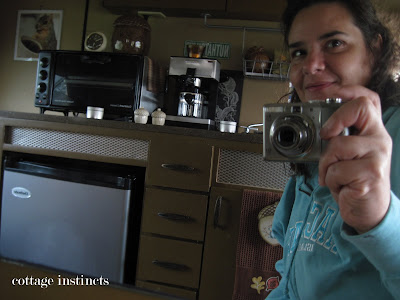 When I did arise from the dead, I made my way to the backdoor and got a wiff of this: 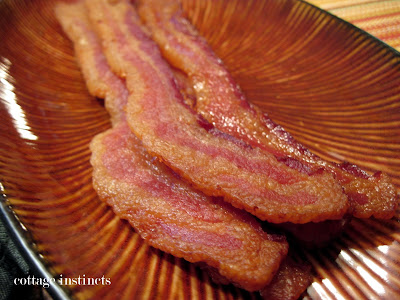 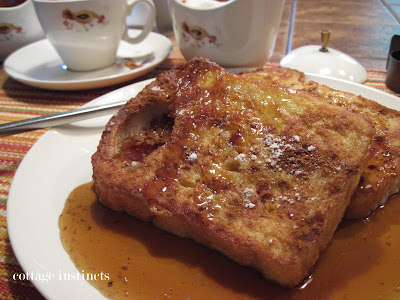 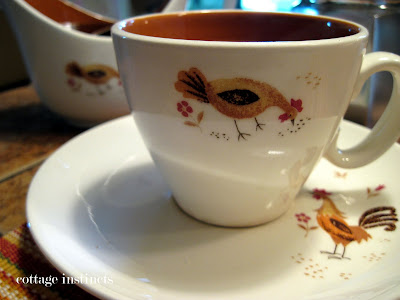 All waiting to be served on this: 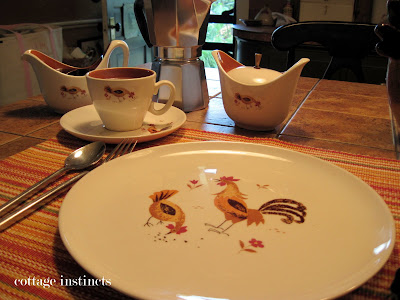 Yep.  I done died and goed back to heaven.  French toast made with Jayme's homemade sourdough bread and the girls' eggs, homemade syrup, freshly roasted coffee beans brewed in a latte thing on the stove, and thick slabs of B.A.C.O.N.  I could almost hear John-boy Walton clamoring up the back steps. 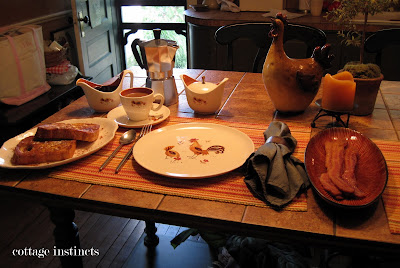 Seriously?  Yes, I still have dreams about this breakfast.

After chow we headed for a farmers market to pick up veggies for our dinner of fresh corn chowder and salad, and made run across the border to IL for some luncheon goodies.  We lunched upon all manner of goodness: 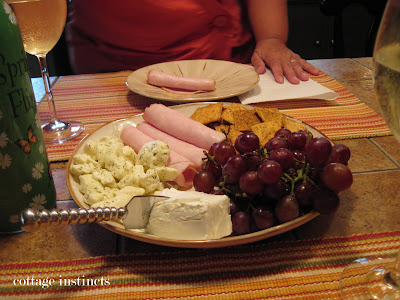 Fresh cheddar from the farmer's market... 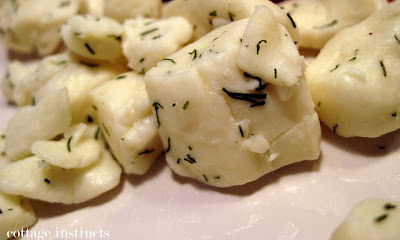 My contribution....cucumber/avacado/romaine sandwich with sweet tomato spread on more of Jayme's sourdough. 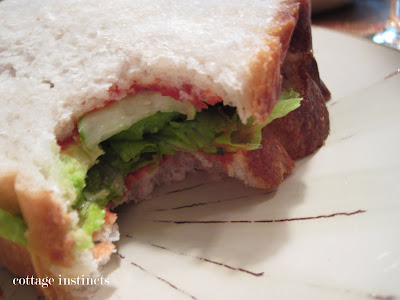 Even Glenco made a bowl of his peanut butter cinnamon popcorn.  Uh, yum. 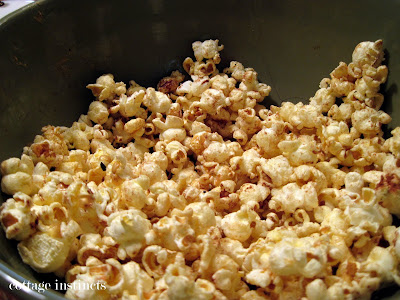 BTW, while we were away, he added to Jayme's "Welcome Cindy Lou" chalkboard message..... 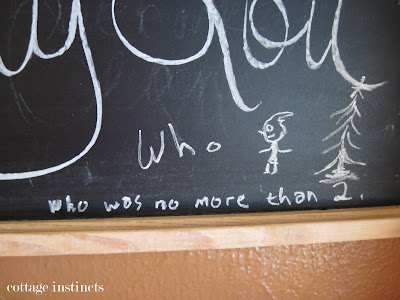 Then that stinker stole my camera and took this: 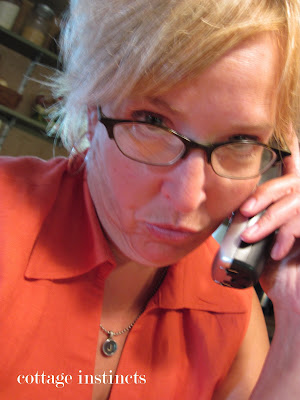 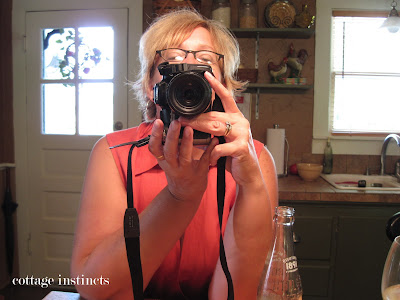 Perhaps the silliness had something to do with this: 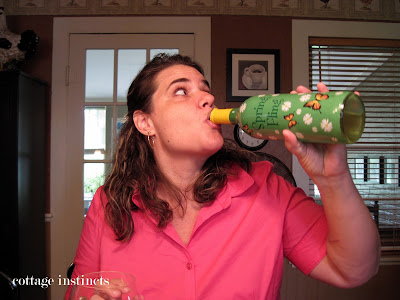 (At least now you know why we had to cross the border on a Sunday to shop...) 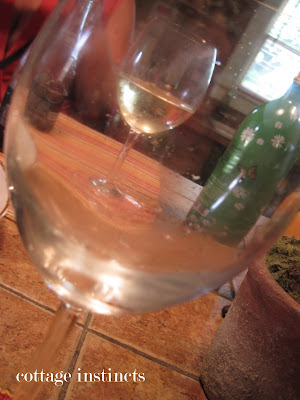 But what a cute bottle, eh?  That's why we bought it.  It was irresistible with that happy green and all those butterflies and bubbles....er, flowers.

And here is our evening repast before I headed back to Fort Wayne: 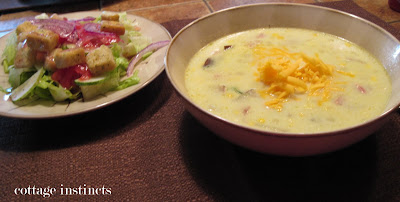 Ok, I still haven't gotten to the Outpost or the shoes, so I guess I'll have to do a part three tomorrow as this is gettin' long..... and it will include more of my mad filming skillz.  Prepare yourselves.

Email ThisBlogThis!Share to TwitterShare to FacebookShare to Pinterest
Labels: The Coop Keeper, Who's Got Instincts?

It sounds like a blast! I could really use a girl's weekend away. Especially one where there's plenty of food, wine and laughter.

Ohhhh yeeeaaa!!! Another faboolus post about me! Exactly how old DO I look in that picture? Oh dear. And, for future reference - there is a potty in the bottom of the courthouse, um, I just couldn't locate it. I've even pottied there before. Seriously. Oh, this has been so fun reliving our little weekend. Twas a good one wasn't it? Ohhhh those hotdogs. Be still me heart. xoxoxoxoxo

Sounds like loads of fun! Anything with gelato and wine is a good thing.

I think Jayme needs to put FOOD WALK on her next adjenda. I'd forget all about gardening if there was food in my house like that!!!

Looking forward to installment #3. Pass the food? I'm not fussy. Quite anything would do.

Sounds like a lot of great food! My kind of vacay.
Love the pictures...what fun!

Wow what FUN! And I never get enough of that chicken purse. I'd love to host a camp over but am now shamed as all I can really cook well are weiners n beans n smores... Chocolates n wine I can do tho ;-0 Thanks for sharing the giggles.I adore both you crazy ladies!

I shall be prepared and sitting here a waiting fer it! You and I must have come from the same stockpile. I so enjoy your posts, you funny girl!
Brenda

Mmmhmmm - definitely looking forward to installment #3! It all sounds like fun to me. How was THAT wine from the green bottle - any good? Maybe it didn't matter :>)

Installment#3 please. Soon. I feel like I'm in a summer read and ready to turn to the next page. Like a good book I would stay up and read till the wee hours. Loved the pics. So glad I found u.
~G~