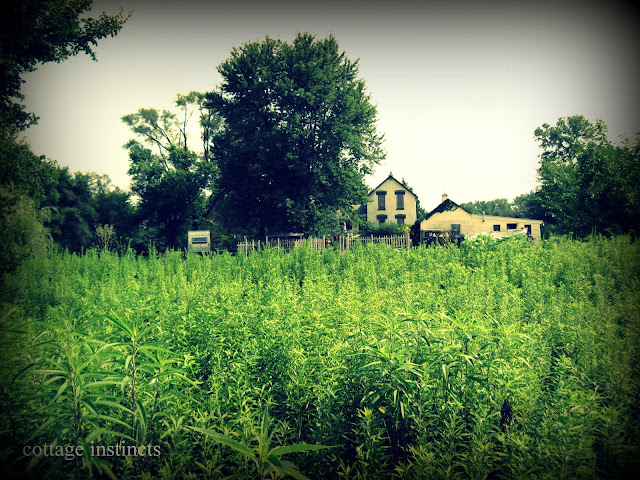 The Coop Keeper saga is finally coming to an end.  I hear that weeping and gnashing of teeth, but there's not a ding dang thing I can do about it.  All good things must come to an end.  If you missed the first and second installments, click here and here. Also, That Coop Keeper has some pics up about my visit in this post, toward the bottom.

Let's start with the bees.  They're out yonder in the garden behind the farmhouse, coop, and The Squirrel. 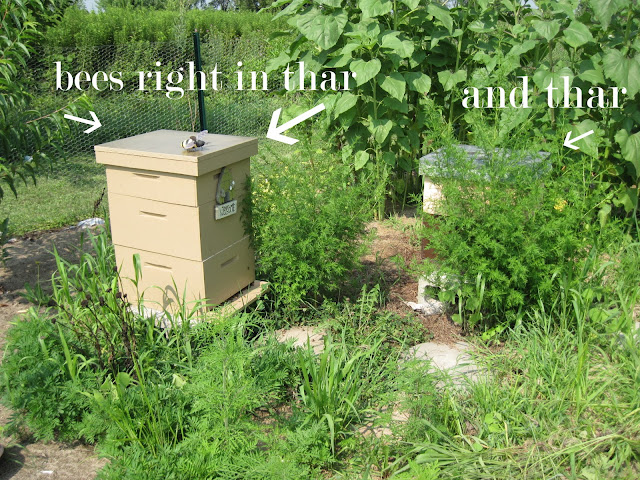 I must admit I didn't see a single bee, but I've seen pictures of Jayme in her getup....and since no one in their right mind would wear that unless they're beekeepers, I'm takin' her word for it that bees do indeed live in those things.

They're cozied up to growing punkins overtaking the beans... 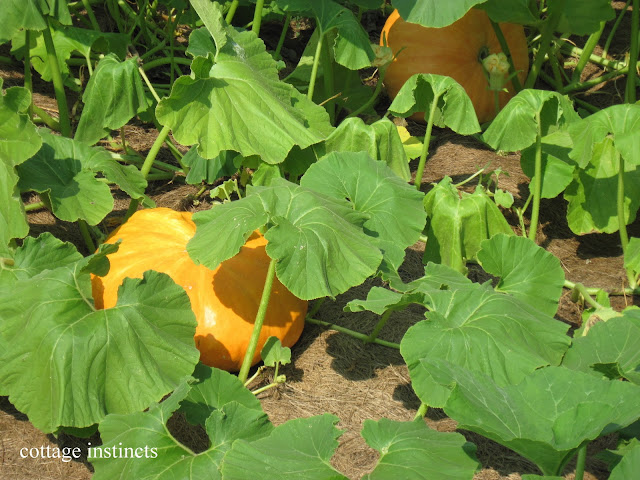 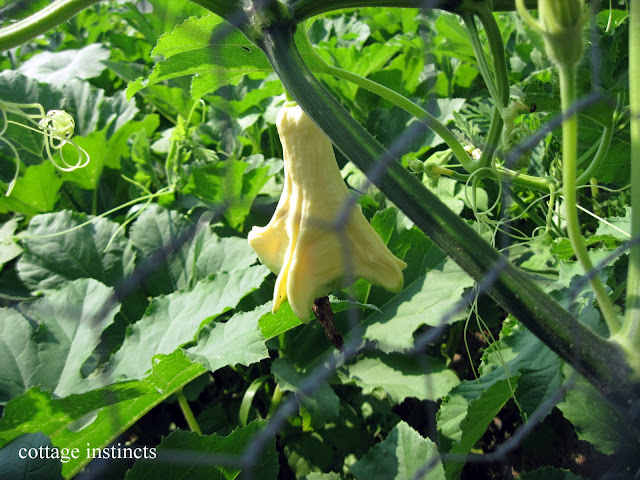 And because Jayme is as random as I am, she has this just sitting next to the garden fence: 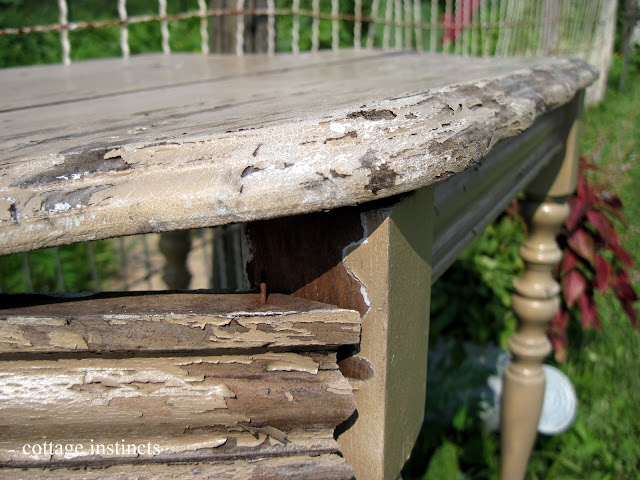 I almost stealed it from right under her nose as we headed here... 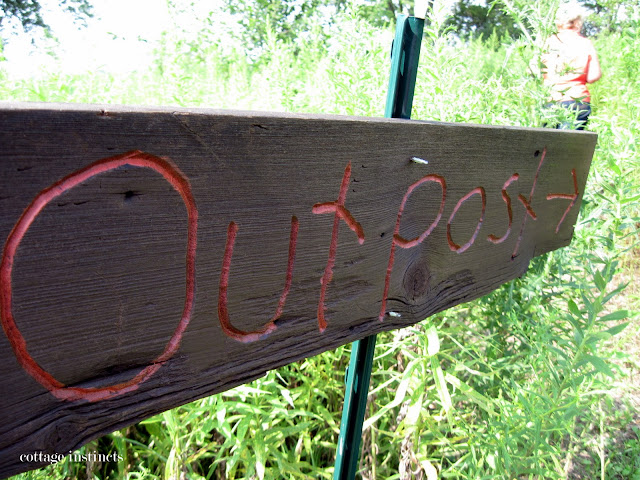 Thankfully she has all paths clearly marked.... 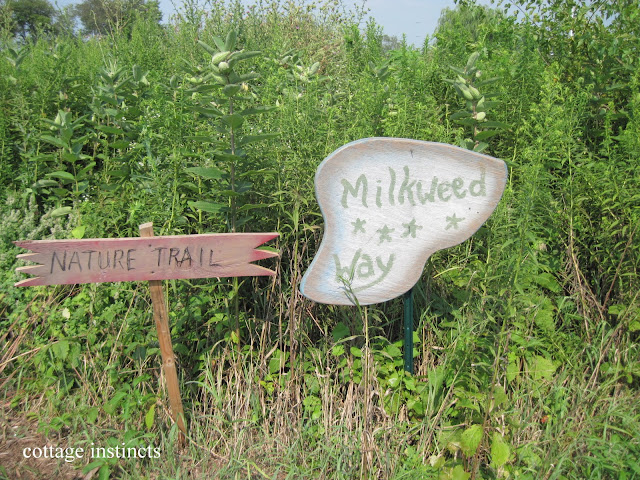 Such natural gorgeousness surrounded us as we tinkered our way thru the maze.  I was beginning to believe that I, yes even I, could grow these fabulous weeds without killing them. 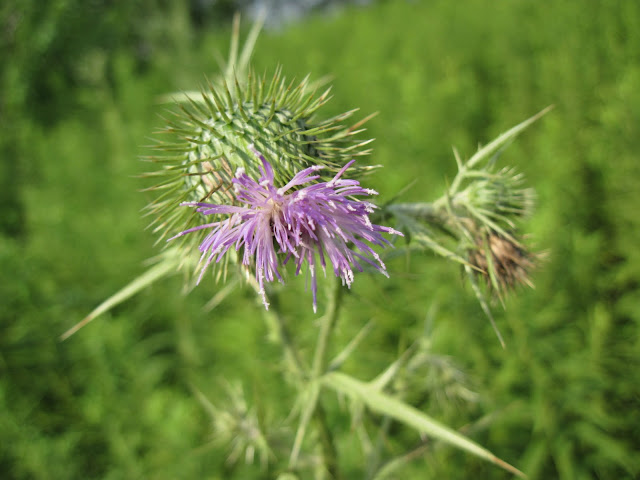 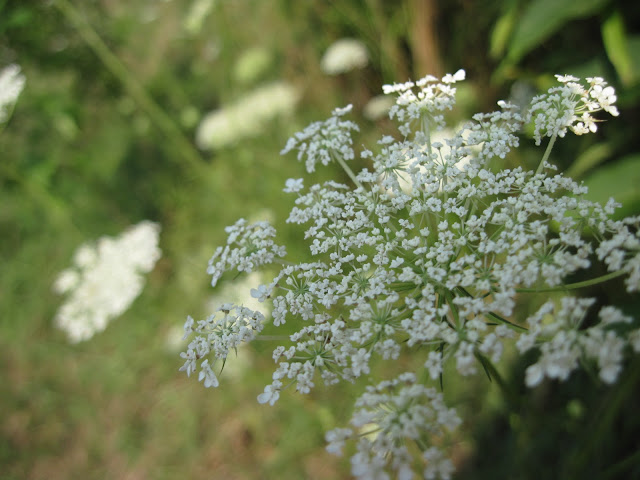 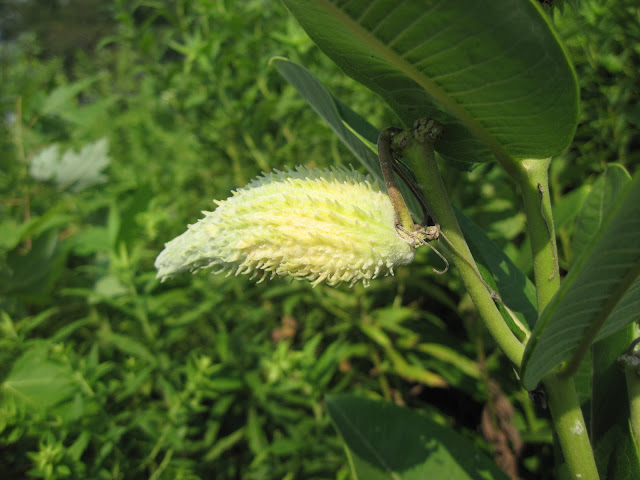 We munched on wild blackberries.... 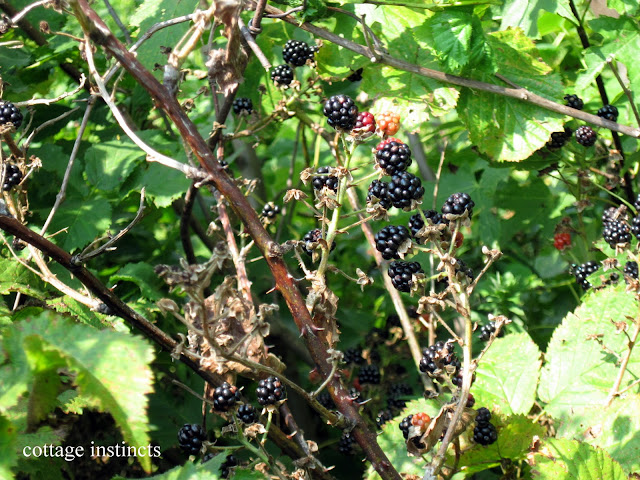 And I pretended to be Elizabeth Bennet from Pride and Prejudice....peeking out from behind a willow to see Mr. Darcy in his soaking wet, sticking-nicely-to-his-bod white linen tunic. 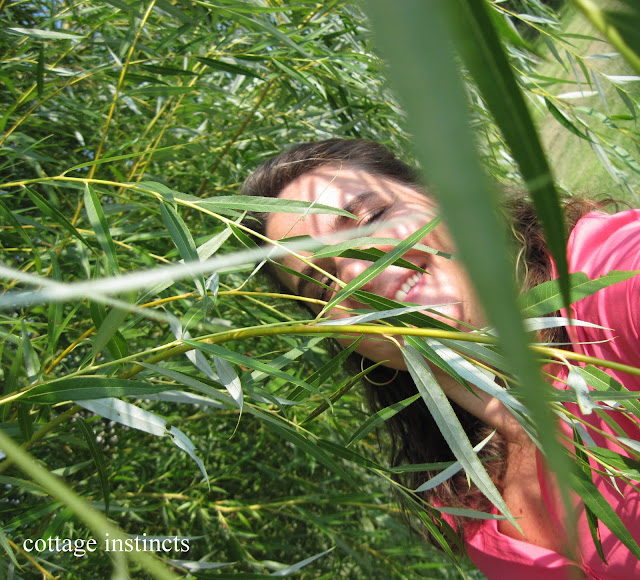 Jayme's Kingdom from the Outpost in sepia (the pic at the top of this post is the same shot but edited in picnik): 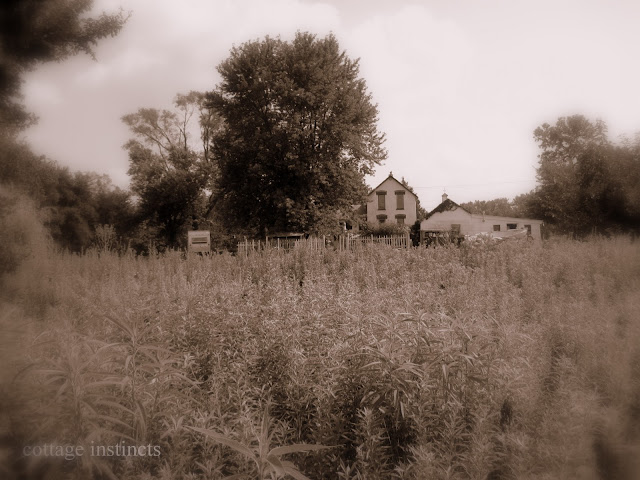 I made another collage.  Be amazed.  All this is right behind Jayme's house. 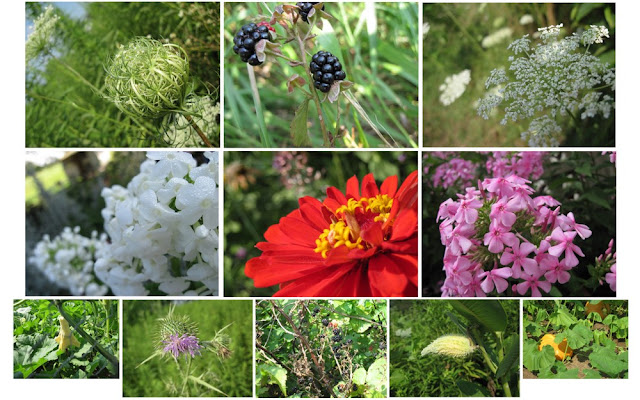 Afterwards, we decided to hang out in front of The Squirrel.  I fit right in: 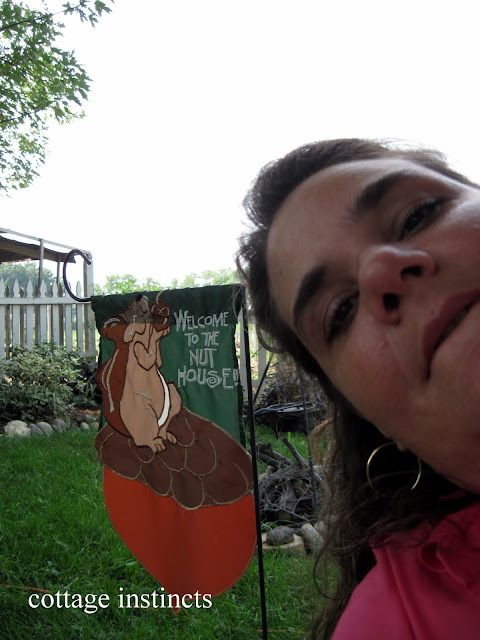 Here's me looking all relaxed-like.  It epitomizes how I felt the whole weekend.  Excuse the neckage. 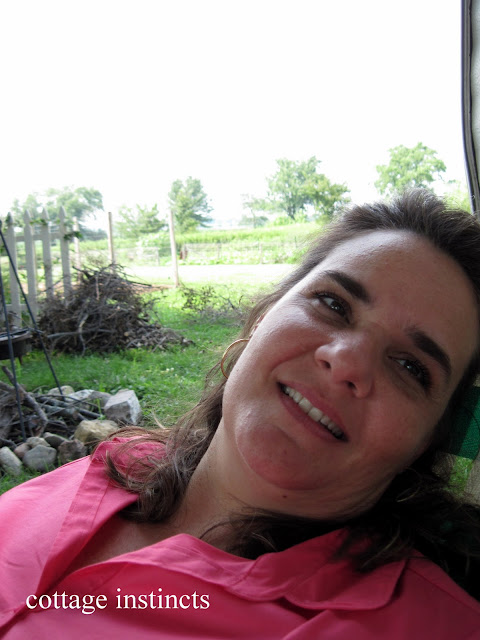 And now I will tell you about the shoes.  Behold. 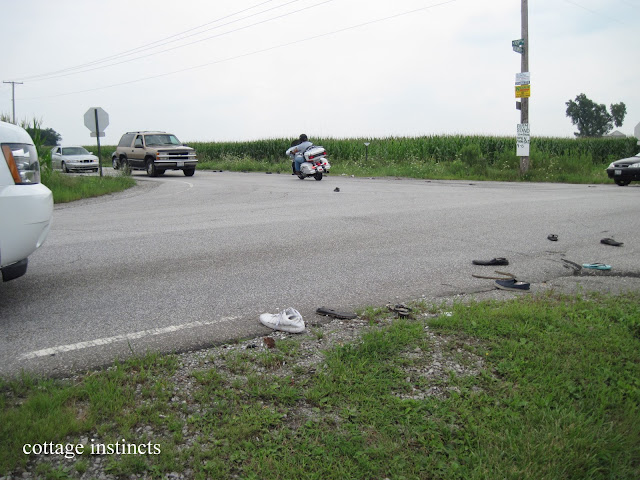 Shoe Corner.
I made Jayme pull over so I could get pictures 'cause I just knew none of ya would believe me if I told you there's this non-descript corner surrounded by corn where people dump their shoes. 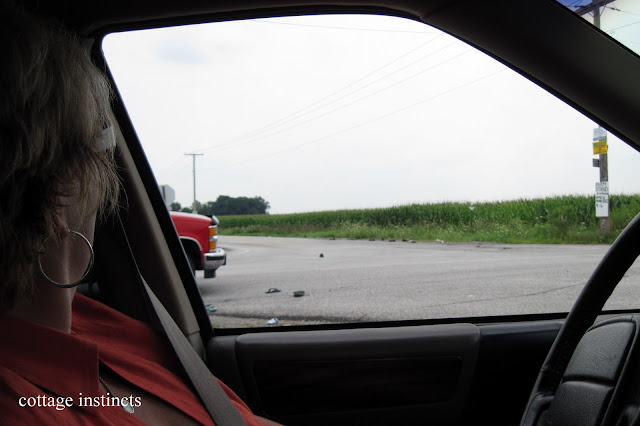 I do believe the other cars thought I was more the spectacle than the loafers scattered to the wind as I got outta the vehicle and started snapping pictures.  I thought it was HILARIOUS that they were all just non-chalantly rolling by this extreme demonstration of the random...as if "ok, so there's like shoes all over the place. Duh."  I wanted to wave my arms and say "How can you just drive by this??? This is funny stuff, People!!!  Someone appreciate the humor here!!!" 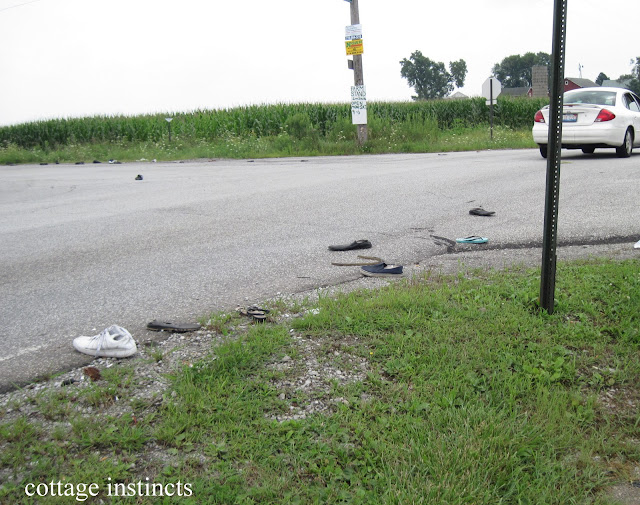 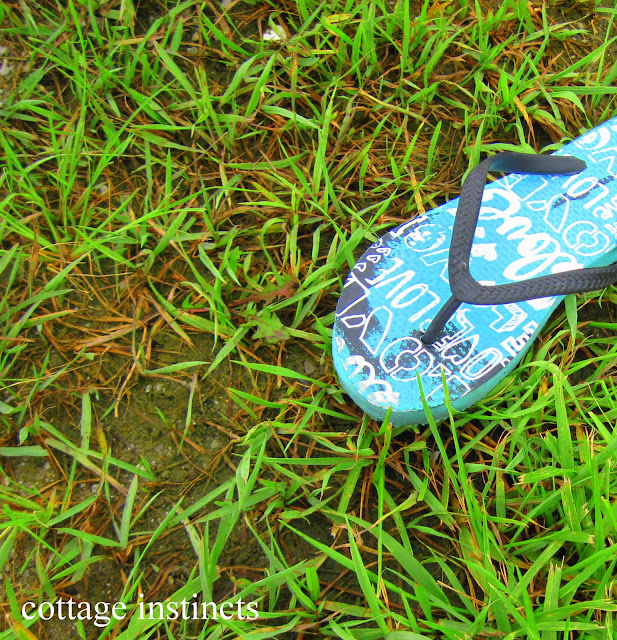 Omaga.....I was rolling.  The more I looked, the more I laughed.  Glenco told us later that he saw a huge pile o'shoes just dumped right in the middle of the interesection a few days previous.  Here's a brief clip of us cackling as we drove away....obviously Jayme appreciates the humor of shoes accessorizing a crossroads in the cornfields of NW Indiana.  That's why I love her.

And now, unfortunately, I've come to the end of my tale.  Saying goodbye is always hard....though we live in the same state, it's a 2.5 hr trek to this farmy-nirvana.  I hated to leave. I shall return.  In fact, I think we should have a fall campout there.  I call dibs on the bed in the Squirrel.  So there.

Of course, we did the obligatory goof-ball shot: 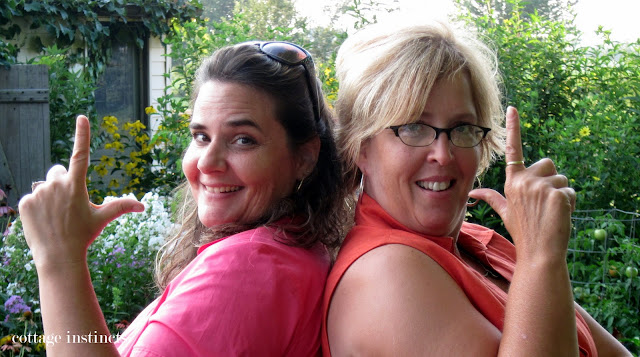 You don't go to Jayme's without doing a parting goof-ball shot.  That's just the rules.  But then she'll give ya a big ole hug...and make Glenco take several shots to get it just right.  Then I'll do a smash-up job editing it in picasa so we both look all glowy and 18. 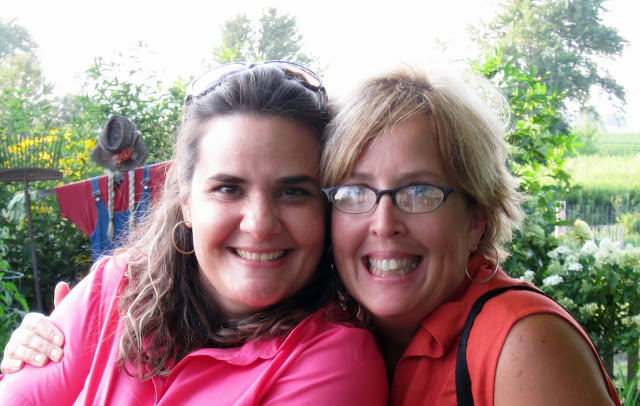 Jayme then picked a pretty to keep me company on the long road home.  It stayed there for 3 days, all shriveled and dead, but I just didn't care. 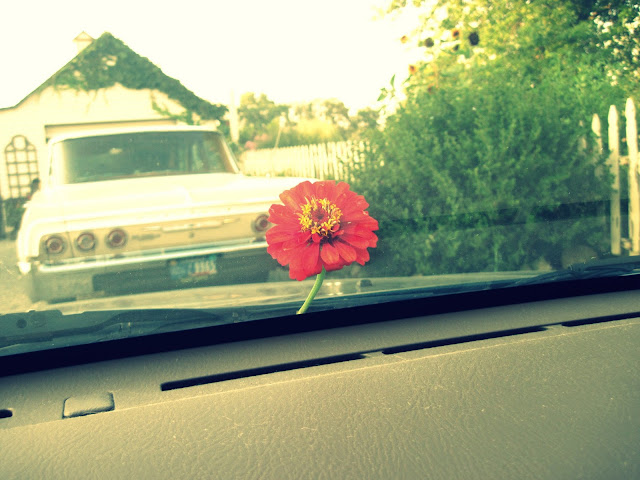 And that's all I got. It was a most excellent adventure.

I miss you Anne Shirley.
Your Bosom Friend,
Diana 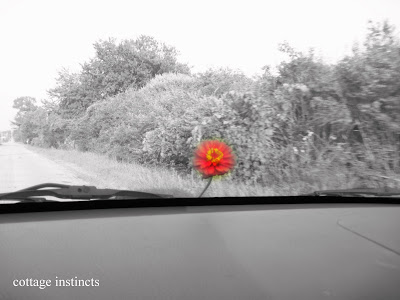 Email ThisBlogThis!Share to TwitterShare to FacebookShare to Pinterest
Labels: The Coop Keeper, Who's Got Instincts?

Ok, I'm hooked. I've got to find me a Jayme, a Squirrel, and a shoe corner. I feel like a kiddo being tucked into bed, one more story, pleaseeee! Thanks for stopping by my newbie bloggie thingie.
~G~

I had to go back and read the first two installments and I was dying laughing listening to that rooster crow!! SO funny! It looks like such a fun trip! And the shoe corner!! Hysterical!!

I loved it! Thanks for sharing your wonderful memories...

Omagoodness, you made me a three parter! GIrl, you are so fabulous. Your pictures make my place look dreamy. I love the shot from the Outpost. Sigh. We shore nuff had some fun, huh? xo

I've never seen THAT many shoes in one intersection, but sometimes I see them tied together and tossed over power lines ABOVE an intersection.

My suspicious brain thinks they may mean something unsavory to those "in the know," which I am not.

What a great friend you've got there. Fun pictures, and I'm in love with the wild plants growing everywhere! The shoes remind me of the gum tree in junior high. It was the tree everyone stuck their gum on. You couldn't even see the trunk.

Cute blog so I am now a follower.

Ya'll's adventure at Jayme's was an absolute riot! I love her place and I loved seeing through the lens of your camera. Great job! We need a winter post about this place!

Well, Jayme's place is absolute paradise! No wonder you didn't want to leave. I'm glad there's signs everywhere, cause I get lost easy. And I'm fairly "direction-less." That shoe thang is downright strange. You sure aliens didn't drop them there for some unforeseen reason?
Brenda

Okay, love your blog! Love the photos. Popping over from the Coop Keeper.

Sob, sob ... the ending was the icing on the cake: "Your Bosom Friend, Diana." I surely would have been Anne Shirley's friend in PEI if she'd allowed it. Hee, hee.

Ya know, all the shoes are all that's left of those who tried to cross that darned intersection. (just kiddin') Sure makes for interesting directions too: not just turn left at the next corn field - it's turn left at shoe intersection and drive for 5 miles.

Thanks for such a wonderful accounting of your visit with the Coop Keeper. Cheers ~

You done this thing up proud. And I'm greener'n green that I didn't get to go to Shoe Corner. That's the funniest thing I've seen all day.

Fabulous! I grew up by Shoe Corner, so like everyone else in the picture, it doesn't phase me at all. But I've heard that every now and then, someone collects the shoes and donates to Goodwill, which is pretty cool.