PSSSST...I'm no longer blogging here!
You can now find me at
www.acottagegirl.com

Can I just say how awesome I think it is that I've passed along the
"take on too much and still rock the house" genes onto another generation? 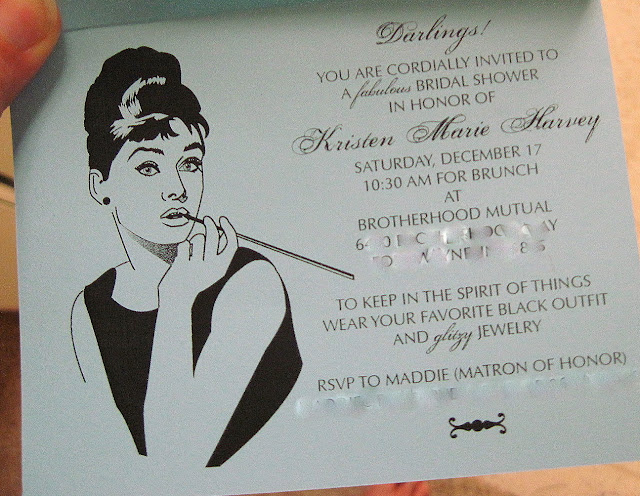 Now that's something to be proud of.
This little bean (oldest daughter) orchestrated a fantabulous bridal shower yesterday for her little sis. 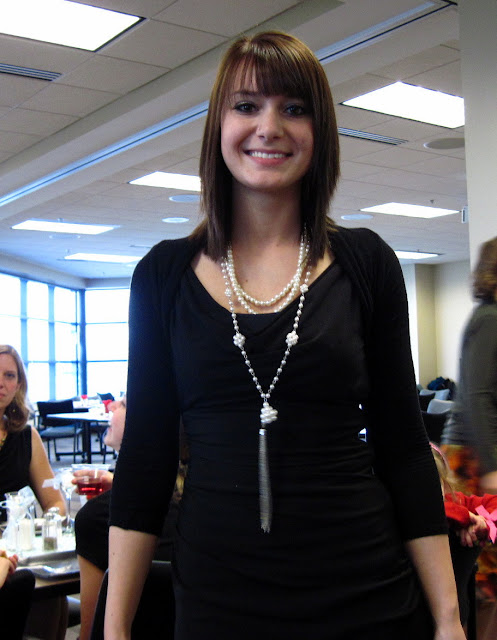 She accomplished this while tackling college finals.
And work.
And Christmas.
Maddie does nothing without tackling it. 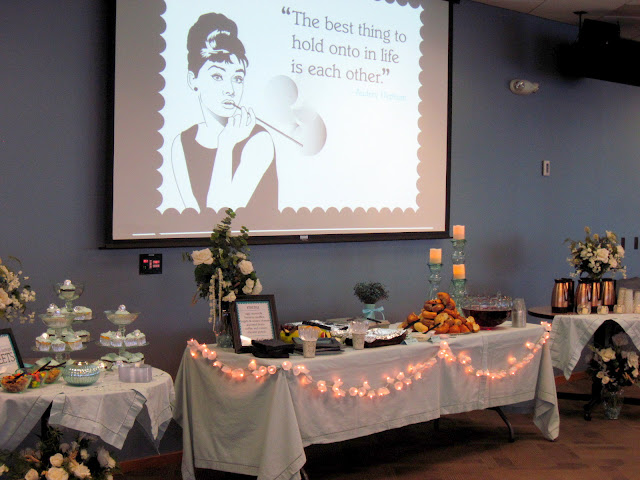 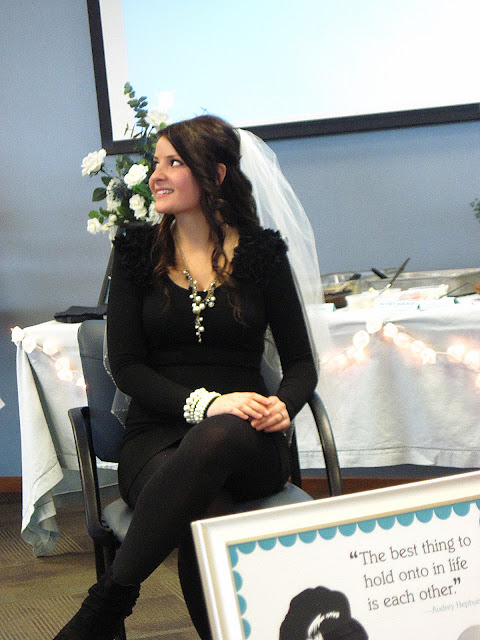 Thankfully, most of the decor was recycled from Maddie's own wedding.
(see pics here and here). 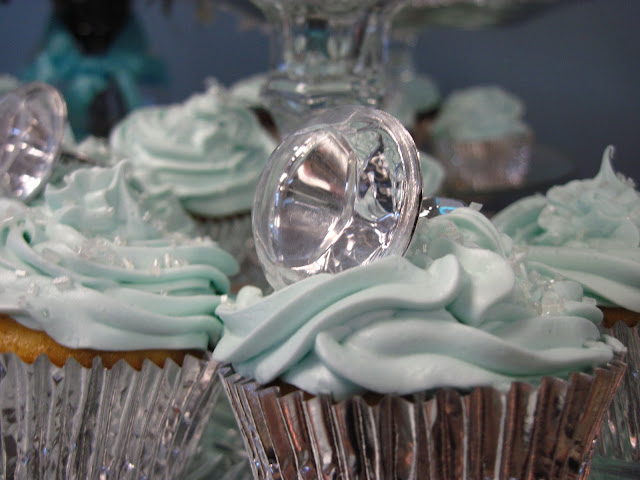 But not the cupcakes.
That would be gross. 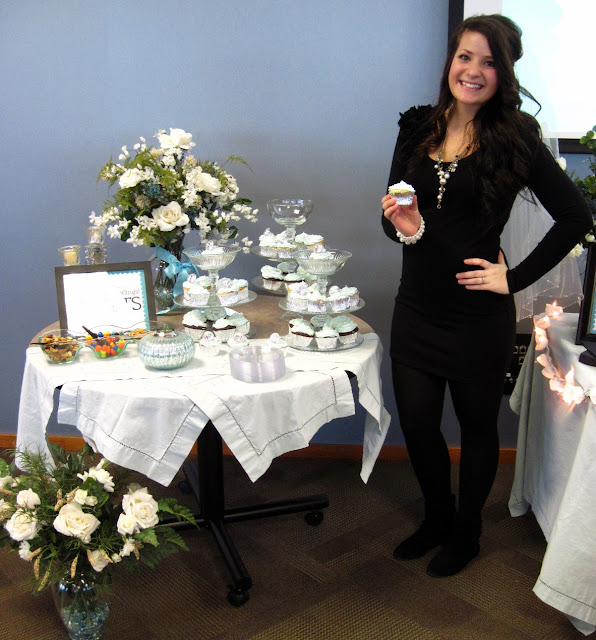 The flower arrangements were, as I mentioned, from Maddie's wedding,
and were all designed by my talented mama. 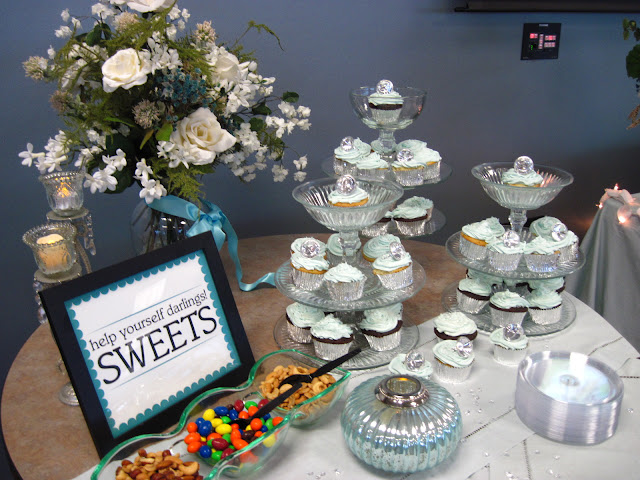 I made the cupcake serving platters with Dollar Store candlesticks, plates/bowls and epoxy glue. 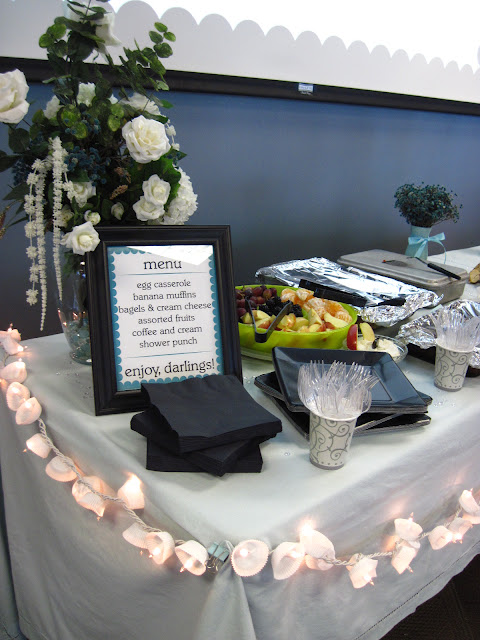 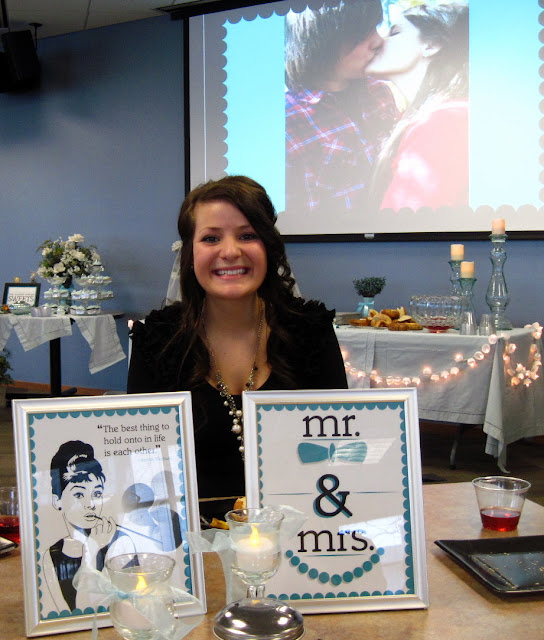 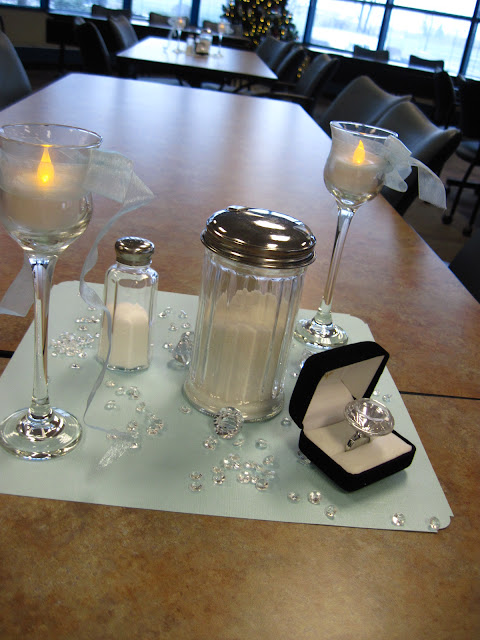 (Who knew salt and sugar dispensers could round out a centerpiece?)

Maddie had a partner in crime (besides myself), her other lil' sis Gracie: 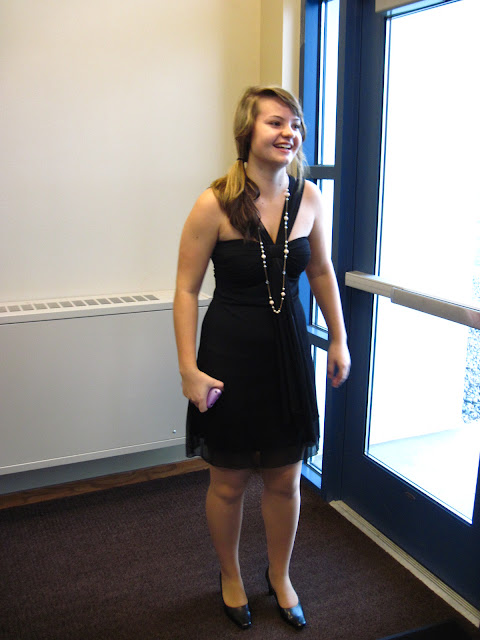 I mostly contributed moral support and some decor from home,
but I did manage to make a big pennant banner,
which of course no one snapped a picture of.
But you can see a blurry bit of  it in the background here, in this goofy pic of Kristen: 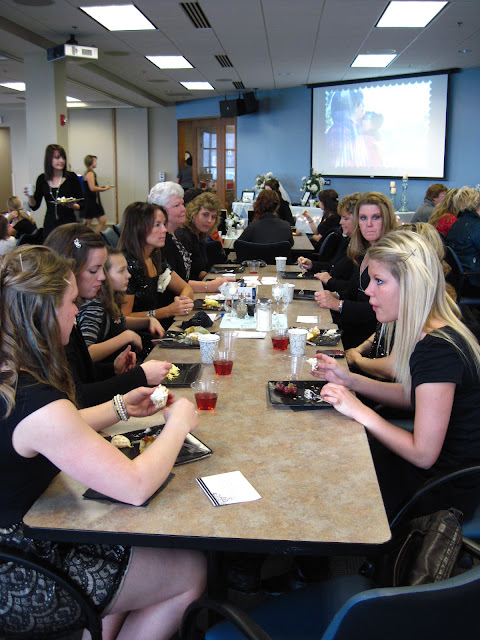 We played a super hilarious game where Maddie had asked Kristen's fiance questions,
and we had to guess how many Kristen would answer correctly.
The sweetest one was:
"What's your favorite quality about Kristen?"
He said: "She's the most unitentionally funny person I know."
Sah-weet! 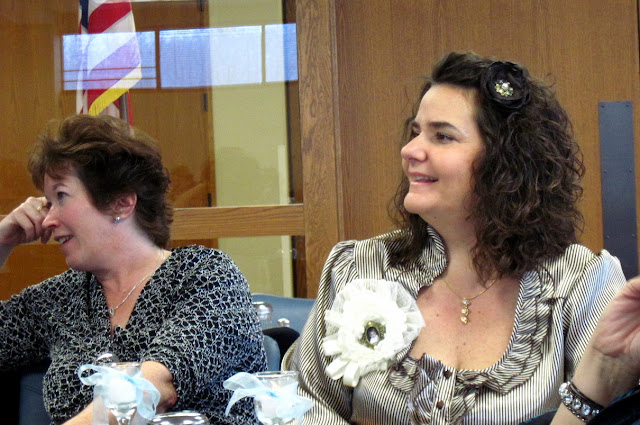 (this is who she gets it from....sporting a new curly-do,
'cause evidently that's what I do when my kids get married, get permed.
Which is better, I suppose, than to get sloshed.)

Then there were the presents.
The two wee helpers are cousins, the one on the right will be in the wedding.
She informs me she will be 'soooo beee-oooo-ti-ful' that day. 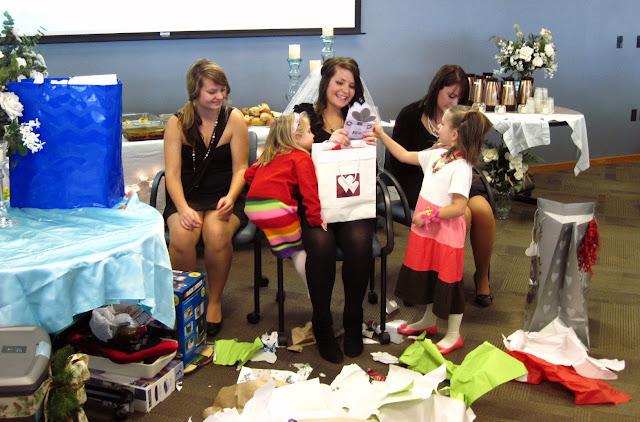 Then everyone divided up into two teams to design wedding gowns for Kristen and Maddie. 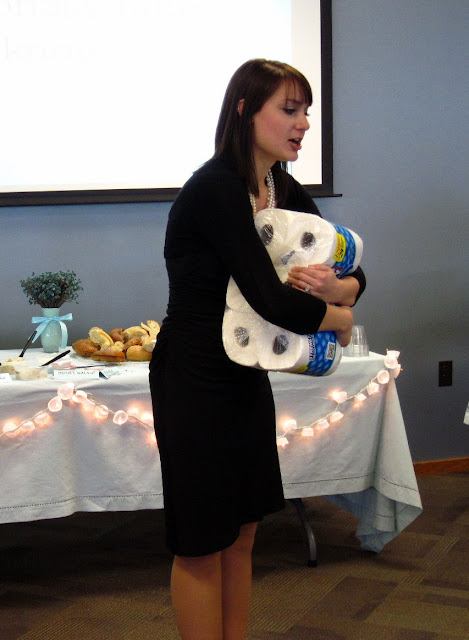 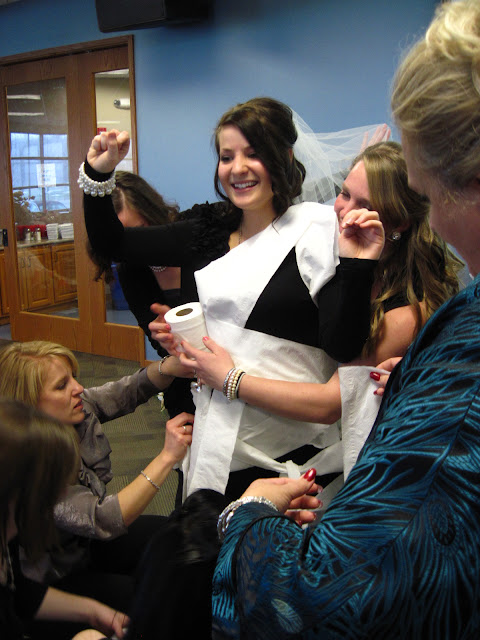 I'm tellin' ya, set a group of women to work with ANYTHING,
and they'll create magic. 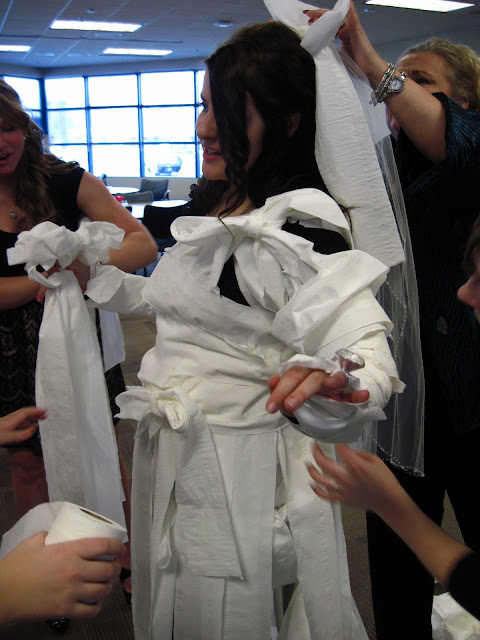 Here's Maddie's gown, which the judges deemed the winner (mostly because Kristen went all Bridezilla on us and ripped her bow out of her hair!)
Doesn't she look right out of the roarin' 20's? 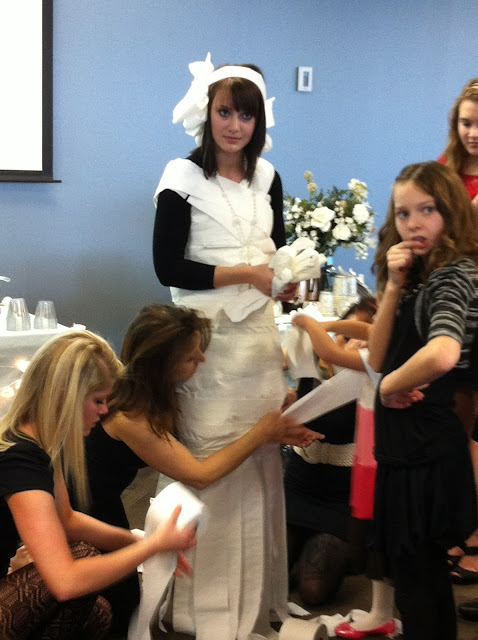 My favorite pic of the day: 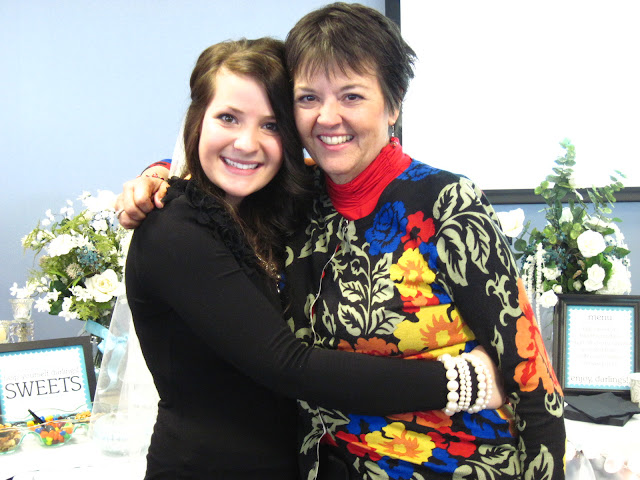 Kristen with my mama. 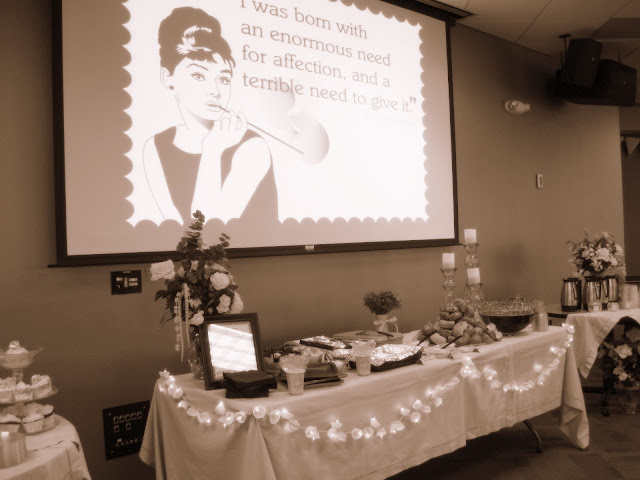 Kudos to my awesome daughter Maddie for throwing the perfectly elegant and totally fun par-tay!
You owned it Schmodie! 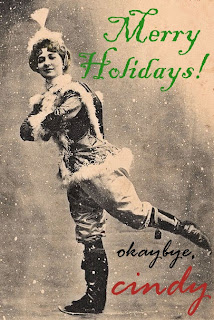 Email ThisBlogThis!Share to TwitterShare to FacebookShare to Pinterest
Labels: Entertaining, Getting Crafty, The Cottage Family

Looks like such a lovely, fun day! So much creativity went into it. You look beautiful! Love your new curly 'do!

gosh darn...I sure missed a fabulously fun day, didn't I? Sure wish I'da been there!!

What a beautiful celebration!
Merry Christmas.

love the theme , you did a great decorating job. im a big fan of breakfast at tiffany's. the cupcakes are very cute with the diamond rings on top!

That's just so sweet! She's got some good sisters.

You always make me laugh! Thank you!
Your children are beautiful...you are very blessed.

Merry Christmas to you and your readers, I'm just stopping by new blogs that i think are interesting. And then ill put some of those on my favorites list to visit again. Happy holidays folks and wishing everyone a healthy new years as well. Richard from a Amish community in Pennsylvania.

Oh- I missed this post before. What a lovely, sweet shower. I really like your hair permed...and yeah...it's a whole lot bettah than getting sloshed! The bride-to-be is just beautiful! xo Diana

Your daughter is going to make a beautiful bride, Cindy! This looked like a fantastic celebration. :-) Hope you enjoy a wonderful Christmas holiday! ~ Sue

What a lovely shower! Looks like a great time was had by all. Love the Audrey Hepburn theme and the decorations.

Love the ideas for the party. My daughter will be getting married next year so this was great!