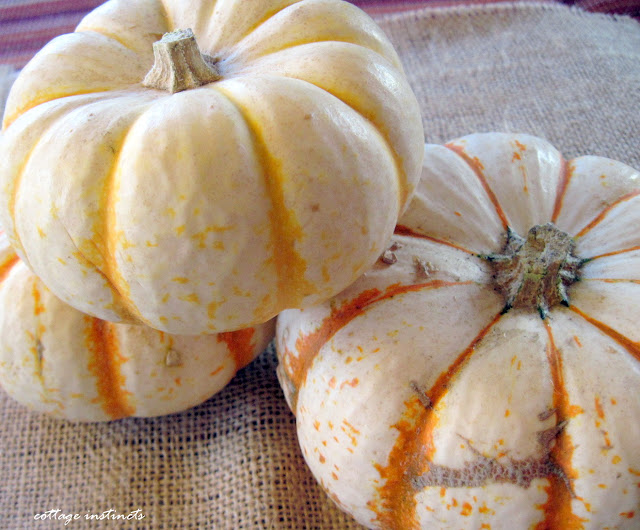 My daughter was called upon to throw a 25th anniversary party for her in-laws.  I offered to help with decorations because, well, you know.

Her Mom-in-law is also my dear friend Sheila, and I h'school her son Jason. You may also remember I did similar party at their place last year for Maddie's 20th birthday.  You'll recognize some of the items I re-used, but this was a different crowd so no one was the wiser :) 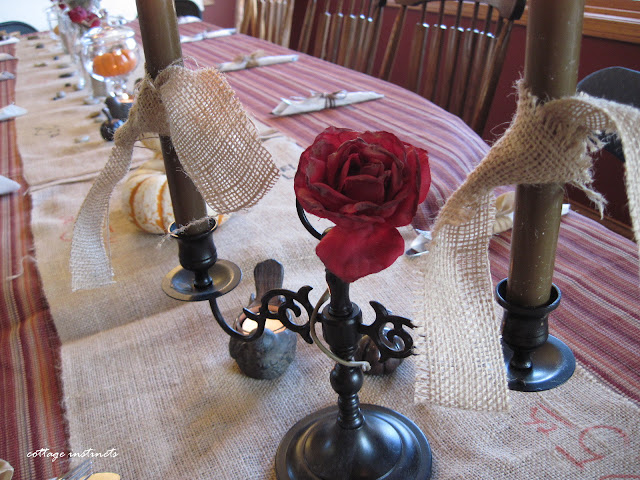 Burlap should be given some kind of award in the fall.  Don't cha think?  Seriously, it's like magic.  Except for when it catches on fire.  Ahem. 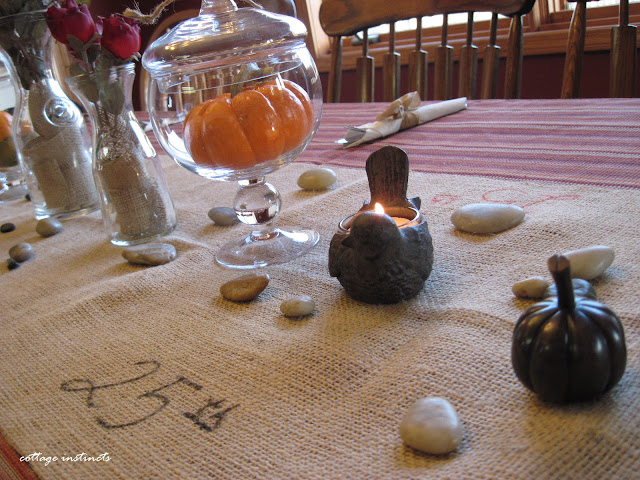 Rocks are also nice. I obviously stole some of my mantle decor for the occasion.  Everyone thought I was genius.  Nay, say I.  Cheap I am.  Like how I hid the stems in the 'vases' on the plastic roses?  Maddie tied regular napkins with some ribbon I picked up on clearance somewhere sometime in my sordid crafting past. 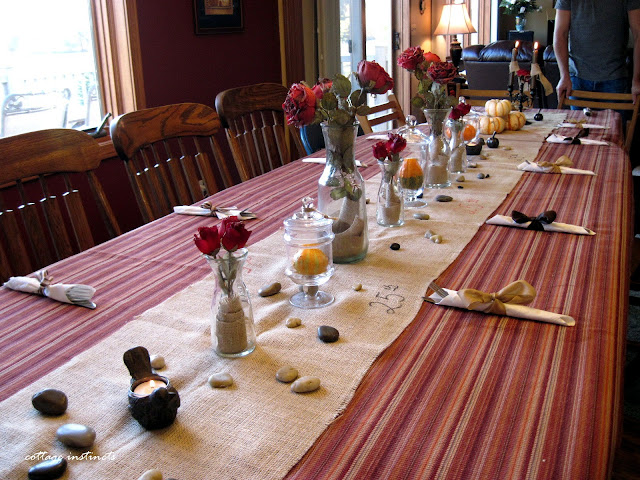 Here's a shot going all the way down the table.  The red striped tablecloth is a heavy weight piece of interior decor fabric I'm hoping someday to make into a floor cloth.  Key word here: someday.  Remember, nothing was purchased new for this party...except the three stacked punkins at the end (and some white roses you'll see in a minute.) 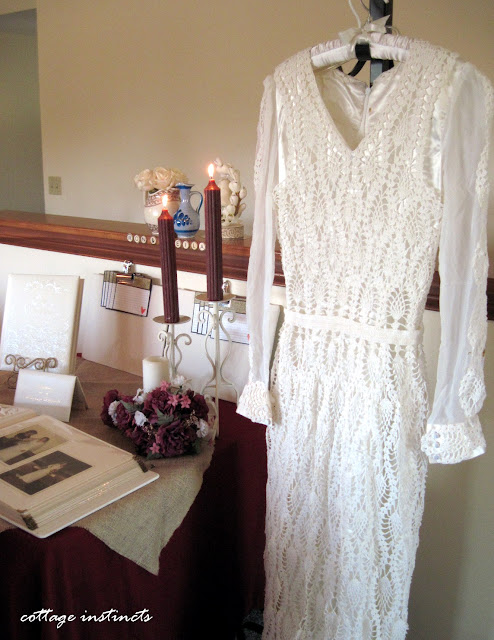 My daughter brought her IKEA coat hanger to display Sheila's bridal gown, which was crocheted by her grandma!  Can you believe that?  Gorgeous....  Maddie actually tried it on, but I didn't get a pic of that. 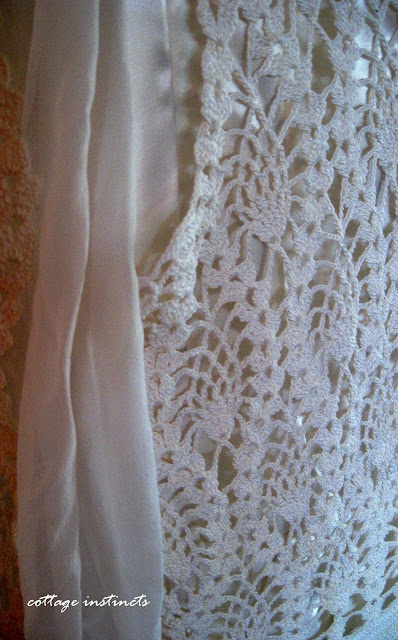 The detail is amazing.....below is Sheila on her wedding day.  Wasn't she beautiful?!  (Pretty sure I wore that same bridesmaid dress in teal for my sis' wedding in '89.  Pretty darn sure.  Actually, pretty sure my own wedding gown looked just like that bridesmaid dress, except in white in '86.  Sans the shiny bits.) 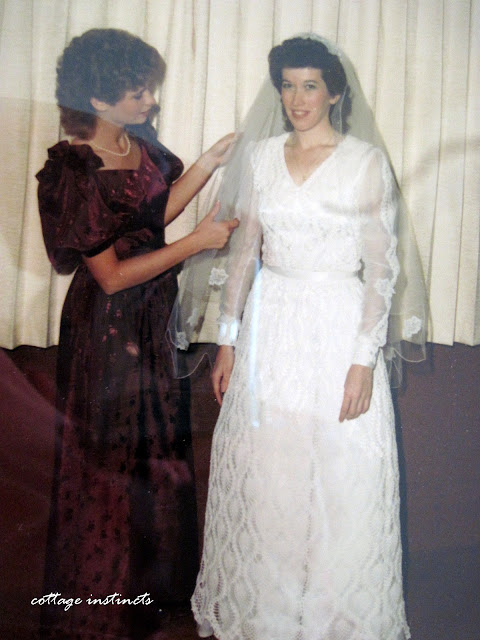 Here's Sheila with hubby Ron in the 'prom pose'.  *snort* 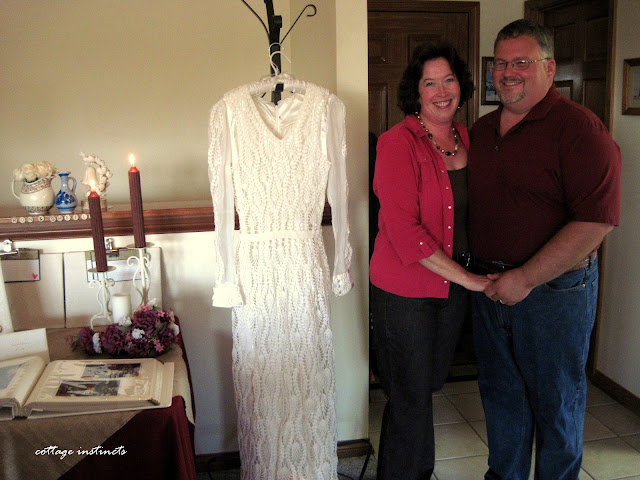 Maddie laid out the table with memorabilia....the notecards were handed out to each couple to write favorite memories of time spent with Sheila and Ron.  Her wedding bouquet surrounds their unity candle, which they tried to light, but no go.  Did I mention burlap catches fire easily? 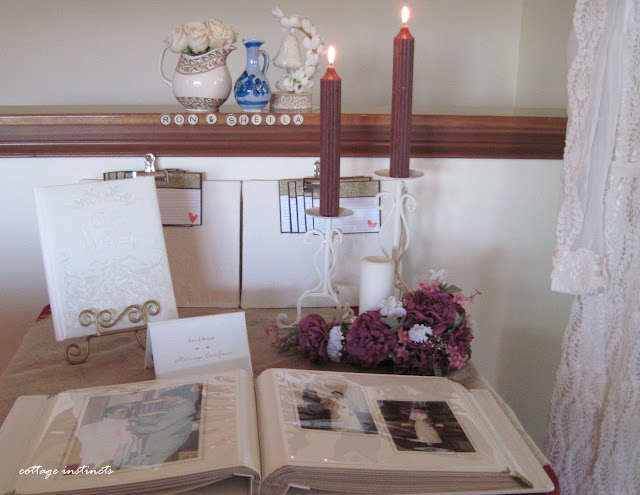 Pitcher is mine from home, as is the Martha cake topper.  Vase was a special wedding gift they received. Maddie got crafty with some lettered wood pieces I brought.  I basically threw a ton of crap stuff in a big ole basket and figured we'd use it all somehow. 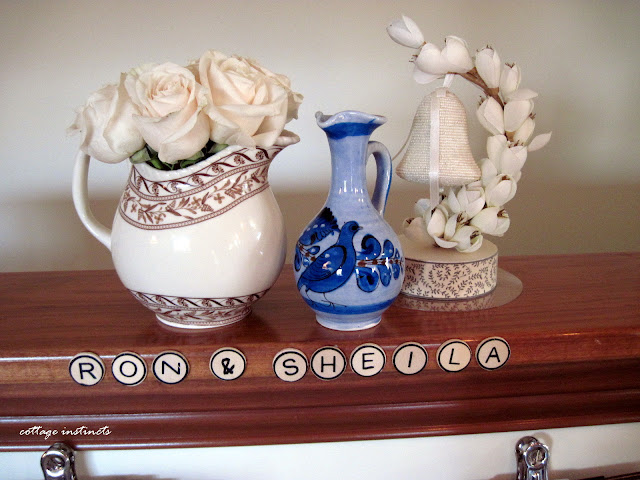 Here's my Maddie, who adorned one of the lacy serving aprons used at Sheila and Ron's wedding reception.  At least that's what Sheila says....I think maybe it was for the honeymoon.  Did I just type that outloud? 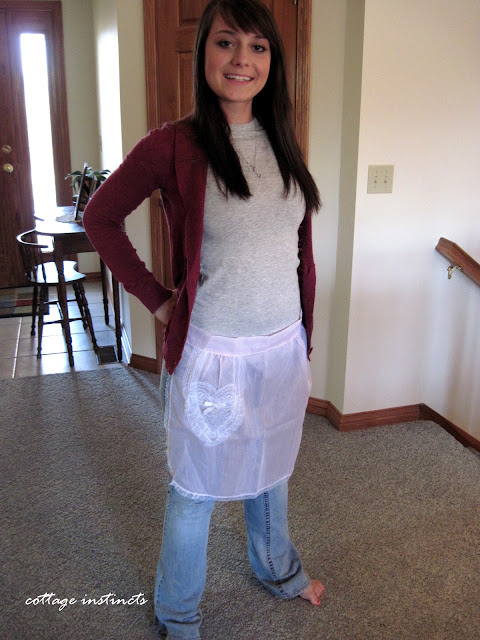 Here are a few more touches I scattered around the living room.  Remember these? 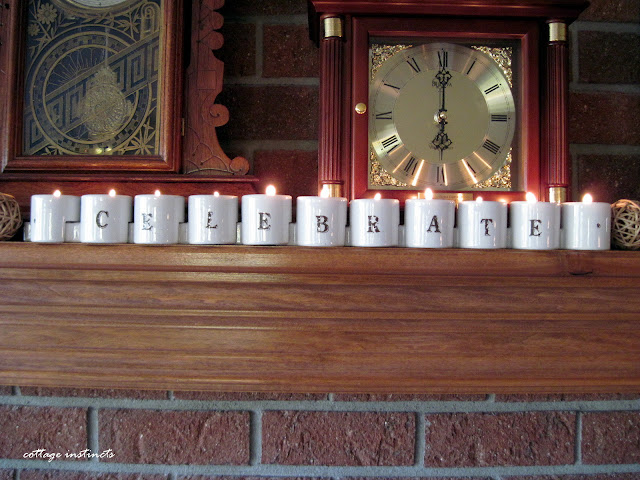 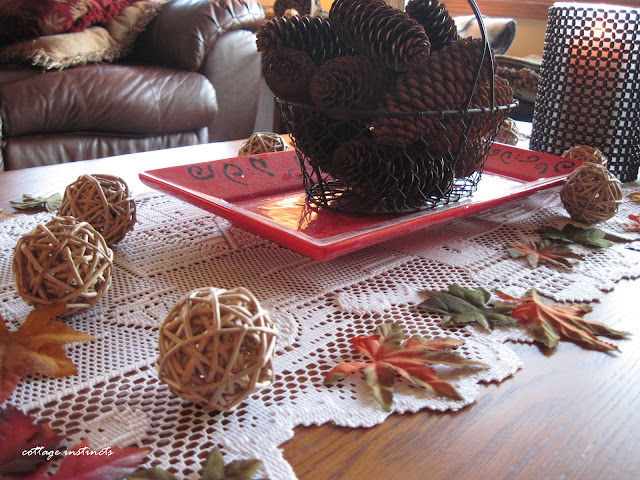 'Course it helps that their home is already decorated in warm russets and browns. And cameras.... 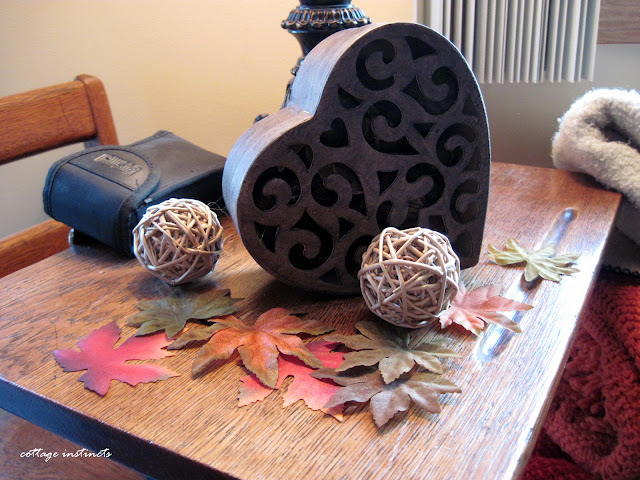 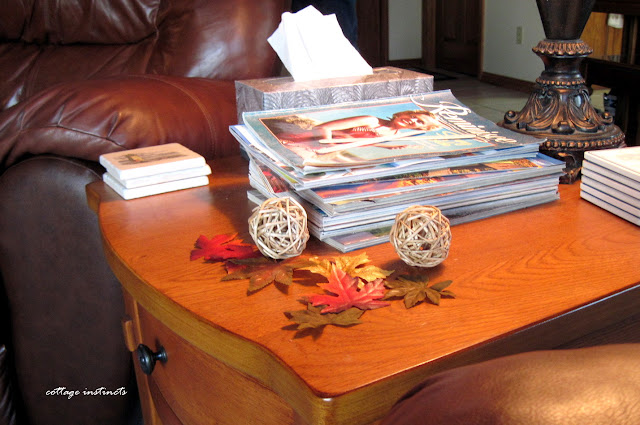 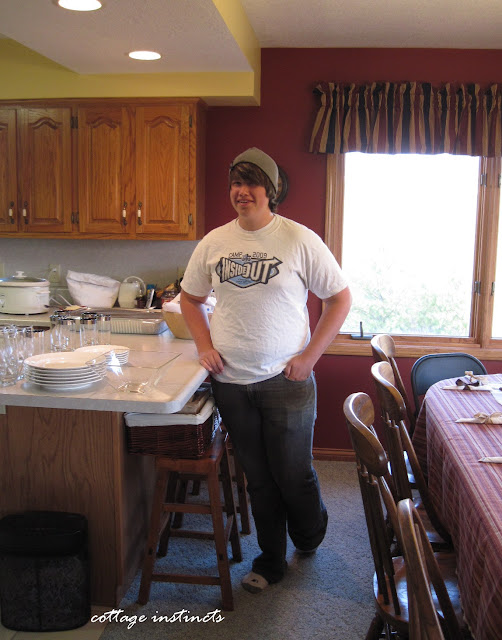 Maddie did a splendid job pulling everything together, and I had fun as usual froufifying someone else's house.  Now if I could just get my own house froufified to my satisfaction.  So how have you used stuff you already have at home to decorate for a party? 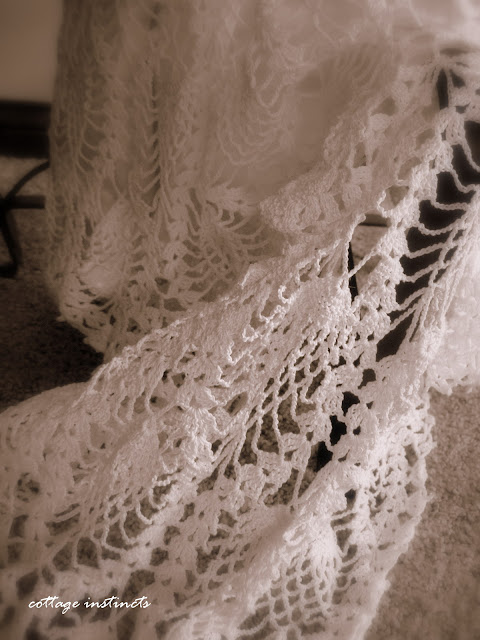 What a sweet thing for you and Maddie (she's gorgeous) to do! Everything looks great. I am constantly shopping the house for events.

Cindy , Love it! you did such a great job shoppin' the house! {Even if the burlap does catch on fire} lol -denise

Greetings! What a wonderful anniversary party, and you did a great job decorating!
Best regards,
Gloria

What a beautiful party!

I love all the individual thought that went into this party... especially the dress and the album on display.

Guess what my mother's family name was? Lawless. It's in my blood. I'm just not quite ready for the in-law thing yet. Oh boy.

But if part of being a MIL is that I get to help decorate for parties, it'll be okay. :)

Awww, what a special way to celebrate their 25th!! You ladies did a fabulous job and made some new memories for them! And I love how you did things beautifully, but frugally!

Wishing the happy couple many more memories together!

Nice party decor!!
Stop over and enter my giveaway when you get time : )

Wonderful job Cindy! Everything looks so pretty. We used burlap runners last T-day down a super long table. We ate outside. I may reuse them again. I am using one now on my table but didn't cut it, just folded it in half since it was so long.

What a wonderful post ..and I read every word. There is just something special about hauling out a crocheted wedding gown...can you imagine the work that went into that? And the decorations are lovely...all Fall inspired and all. You are right- her home has all the right tones in it for a Fall fest. Nice job! Diana

Great job you girls did! Isn't that dress gorgeous? Wow!

Burlap...nuff said :) You guys threw a beautiful party for them. The dress was perfect. Getting a cold and not feeling well but I got a good laugh out of (did I just type that out loud?). Fun read and party!

Great decorations! I loved the picture that showed the length of the table...really showed how pretty it looked.
It looks like it was a lovely party and the anniversary couple look very happy.
Loved your commentary about the bridesmaid dresses....I think I wore a few of those too!
Jane