Not for practicality sake, though if I lived in hurricane-prone areas I'd love 'em for that.  I love 'em when they show their age like a crown of glory....chippy and battered and beaten by years out in the elements.  Here's how I've used old shutters, new shutters I made to look old, and used shutters I haven't touched.

My favorite-ist is this chippy old one I picked up last year at an antiques shop. 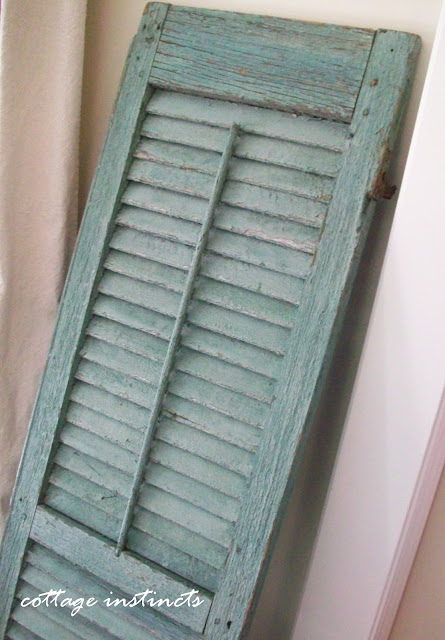 Just hung it and sighed in wonder. 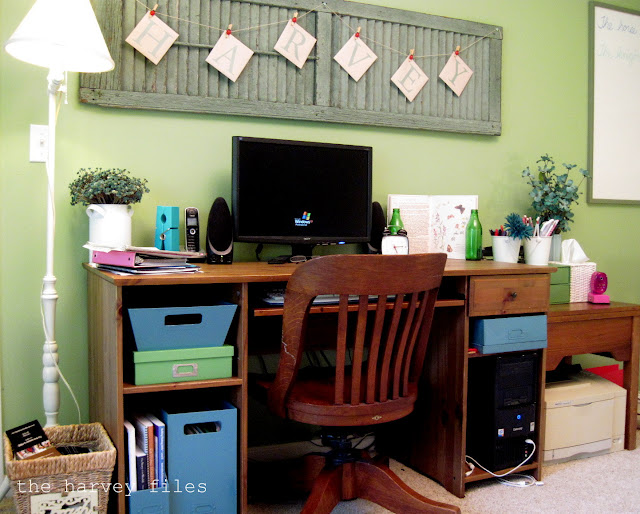 I used it as the foundation for my header pic and button at my homeschooling blog the harvey files. 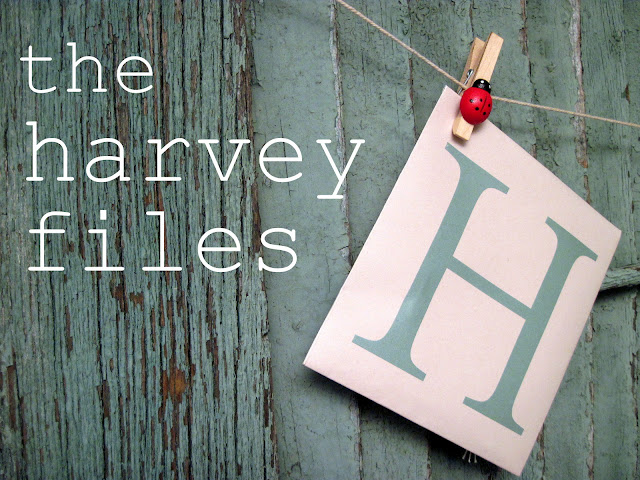 The other shutters I picked up at the ReStore.  One I painted, sanded, dry brushed on some white and hung on the back porch: 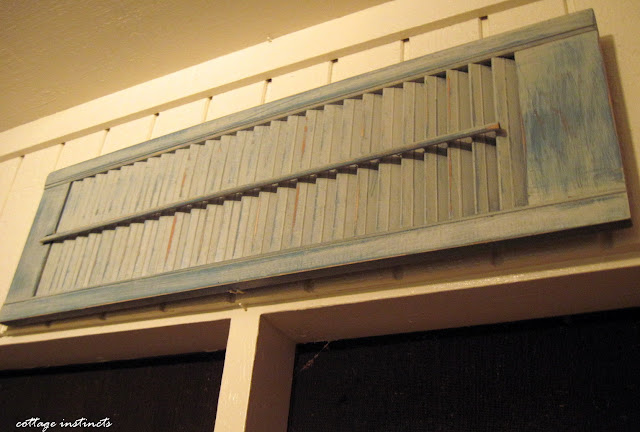 Then there's the other two sets.  The small set I haven't even cleaned the cobwebs from.  Eewww.  The second set I sprayed with heirloom white.  Might distress and glaze later.  They are adorning my mantle for the fall. 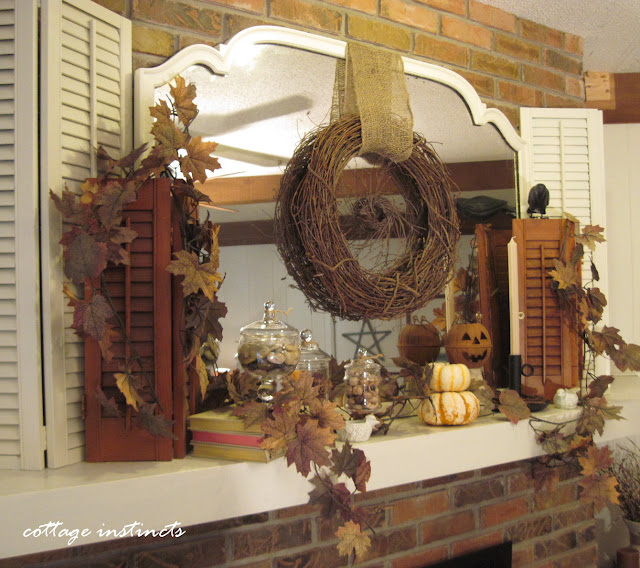 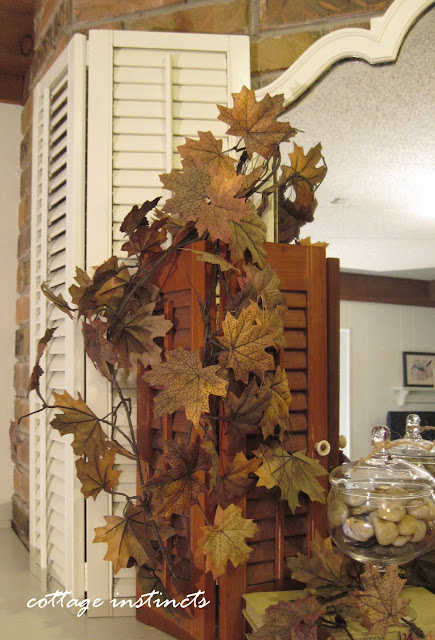 On the exterior of my house, the shutters aren't my fave, but after I painted them, they've grown on me.  These shots are from last fall: 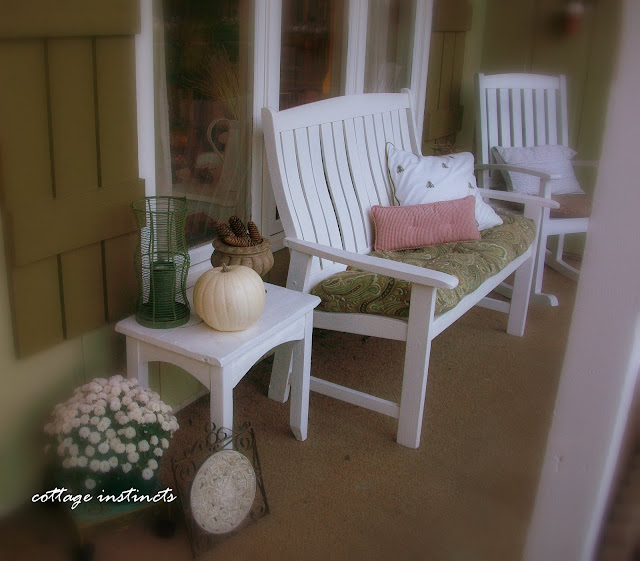 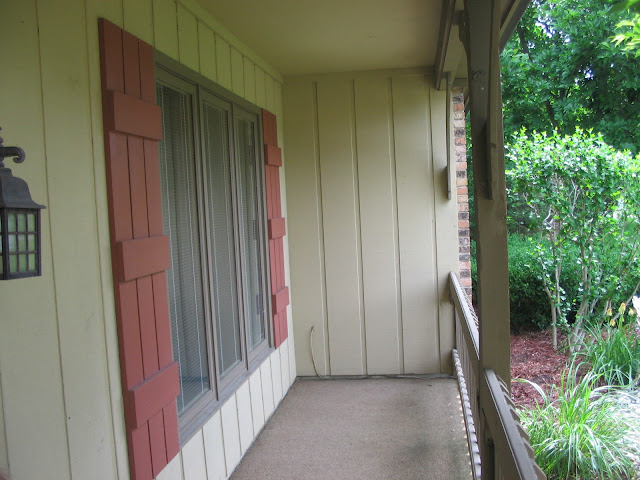 Shot of the outside just the day of our inspection with the orange shutters and brown trim: 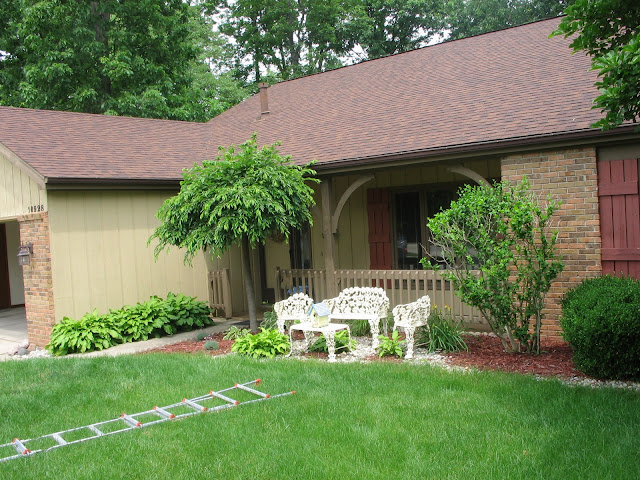 Last summer after I had just painted the house green, trim white  and shutters deep olive. 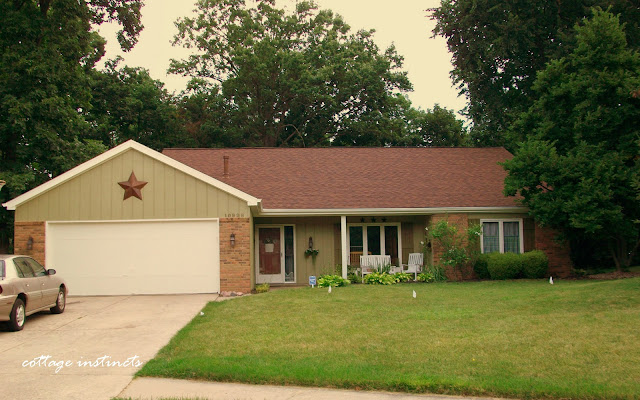 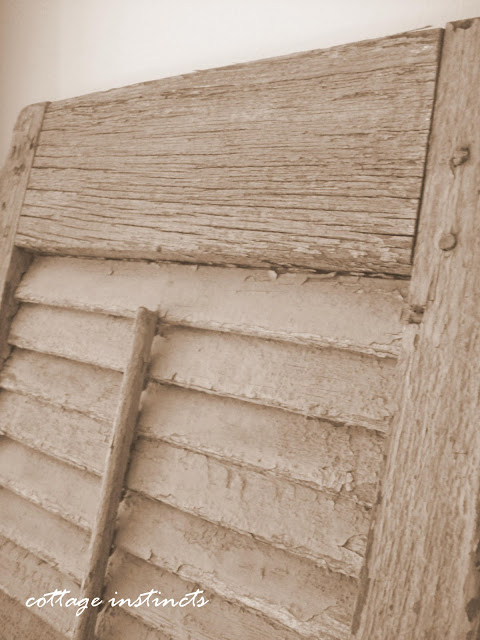 This post is linkeroo'ed with Donna's Saturday Night Special.

Email ThisBlogThis!Share to TwitterShare to FacebookShare to Pinterest
Labels: Accessories, Antiques and Junk

Love your shutters. I especially love the one with the banner. I have one old one I got at the flea market and really like it. I have a thing for old doors. So pretty.

I love shutters too. My daughter talked me out of buying a big pair for $5.00 because she didn't want to wrestle them into the car (SUV-they would've fit just fine). That was about a month ago and I'm still mad at myself for not insisting on getting them.

My other daughter has those same shutters on her house-exterior ones like yours. It must've been the "thing" to paint them red. Hers were red too...on red brick... She painted hers black and they look 100x better. I really like the olive green on yours too, though. It made a big difference. The exterior of your home looks great. Hugs- Diana

Oooopss-meant to say that I absolutely LOVE the one above your computer ...

Be still my heart ....... that turquoise shutter is AMAZING!! Perfectly chippy and your signature color for sure!!

I love your outside shutters!!

Love your shutters. I have been anxiously searching for shutters on Etsy. I am being very patient.

I love shutters, too! And your small shutters in front of the larger ones on your mantle are such a terrific idea! I actually like your exterior shutters! I agree, they look much better since you painted them :)

Love all your shutters, especially the one over the desk. I've been wanting to put shutters on my mantel. Yours look great. Have a great weekend.

I love your shutters! The closest I've been able to come to them lately is the swinging doors that I bought a couple of weeks ago.........still hunting and hoping for some!

Your favorite is my favorite, I love the color. What clever ideas you have. All of your photos are wonderful as usual!

LOVE all of your chippy shabby perfection shutters!! ;)Rachel

Oh now I'm lovin' your shutters. Like the outside ones the best I must confess. I tried to make some like that to put on an interior window - it's complicated to explain why on the inside - but the wood kept splitting on me so they were all painted and everything but never assembled. Now I'm reinspired to try this again.

I love all of your shutters and your mantel looks fabulous!


I just love how you used the shutters on your mantel. The way you mixed the painted ones with the stained ones. The balance along the mnatel looks perfect.

I love shutters, too. I saw a bunch at the ReStore last week and am still thinking about them.

My favorite is your beautiful aqua shutter - gorgeous!!

Hi!
I am a brazilian Girl and I would like to say that I love your blog. All things here are so wonderful!!!

Anna @ Take the Side Street said...

Loooove, love love those blue chippy ones at the beginning -- I might need to start searching for some! Also the color your painted your exterior ones looks SO great, big improvement over the original color. Great job!!

Thanks for stopping by my blog too!
Have a good weekend :)

Your home exterior is soooo nice. And those shutters are fab. Not boring plastic ones like mine. It's great that you can paint them to your liking. Great job.

The first shutter you pictured was perfection. I love how you have it hanging above your desk. I also really like how you have layered the two different shutters on your mantel...it's a great look.
Enjoy your weekend.
Jane

Oh gosh, why can't I ever find a shutter like that first one. Perfect color and perfect chippiness! I'm making that a word ok? Love it, must find one!

Personally I don't care for shutters. I don't like the battered look, although I do agree that you do it well for the look (if I liked it I am sure I would love yours lol)

With that I LOVE the mantel!!!!! Which shows that just because I don't normally like something doesn't mean that there aren't times when I do. hehe

I say that if you don't love shutters, then there is something wrong with you! LOL

I really, really like how you have used them throughout your home.

And I love how you do shutters. :)
I really like what you did with your mantel, too. Very fall.

Love those shutters....especially on the mantel! Linda

I love shutters, too! Yours look so charming!

That turquoise shutter makes me CRAZY. :) And love the double upped variation on the fireplace too, that is cool! Makes your fireplace grander, yet the lighter tone on the outside doesn't overpower the area. Very nice!!

Love all your shutters! That first one is a real beauty...what a perfect color :)

Love the blue shutter, of course; but I REALLY love your sets of shutters on your mantle! FABULOUS idea!
Best regards,
Gloria

Me too! I love shutters! I do think it is funny how American houses have them only for decorations. We had real ones you could close in Switzerland and I miss that! BUT, I have been looking out for some to hang as decoration. How do you hang them though? Find studs..and then what? I'm a little afraid of hanging heavy things.

Love your blog, love your shutters--especially on the mantel! Thanks for sharing.

Have a blessed week!

I love 'em all...and I'm normally not a shutter-gal...but you do em up purty! And do you like your sectional? My fam is trying to talk me into one...
Rene

I love shutters. And I haven't got a single one!! I know it is shocking and needs to be remedied. Especially since seeing yours. I love yours!!!

I love all of your shutters. Especially the light aqua colored ones. They would love perfect in my house!

I am a new follower. Came by to participate in Make it 4 Monday. I LOVE your decorating ideas and adore shutters!!

Loved your shutters and linked this to my "shutters" post too!

I prefer to use plantation shutters for doors and windows as a better option. As they are eco-friendly and child safe.

I think your DIY projects look amazing. It is a brilliant idea. I mean, you can't see furniture and decors like this in any houses here in our country. The use of old shutters and window shades as decors to your house is brilliant!