Exterior Before and Afters.....

I'm joining the party over at Sanctuary Arts.....it's called "You shoulda seen it before!" So we're supposed to post an atrocious 'before' shot, and then a happy 'after' shot. Here's mine....

This is my house the day we went for our inspection. I still can't believe I saw the potential, but hey, it was 5 bedrooms and 3 full baths! With 5 kids still at home, I felt certain I could transform this 80s ranch into a quaint little cottage.... 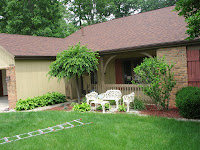 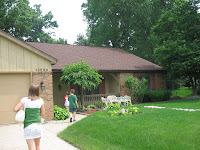 In July, I began painting the outside of the house, removed the porch railings (that were falling down by themselves anyway), and added some porch furniture. Voila! (pics will enlarge if you click on them) 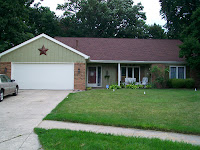 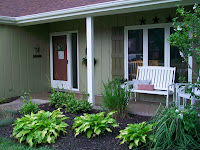 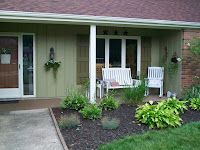 Not too bad, seeing as I had to work with an orange/peach roof and salmon-colored brick, eh? I'm still toying with the idea of adding white porch rails, but so many folks have said they like it open that I'm not sure I will now. What say you?

Be sure to visit the other 'before and afters' at the party! 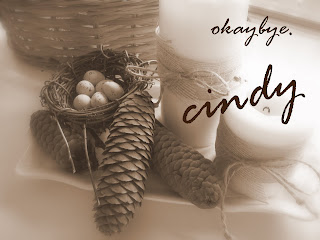 Email ThisBlogThis!Share to TwitterShare to FacebookShare to Pinterest
Labels: Outside the Cottage

Great job! I love that color.

The Pleasures of Homemaking said...

Looks great! We both did exterior before and afters!

Oh so much better... Love the new color too! Great job! Thanks for sharing!
~Whitney

It looks great! It's amazing how a little whit makes everything pop too! Thanks so much for joining in on the party! Jen

I love your Hostas! Wish mine would survive but I have full sun. :( Thanks for sharing!

It looks so bright, open and home-y! Its amazing what a can of paint can do!

Wow, such great updates! My husband and I are trying to figure out how to update the color scheme on the front of our house... I love what you've done! Such great inspiration, thank you!

Beautiful. Love the opened up porch :)