Those Harvey Girls are Cookin'!

The older I get, the more I find value in traditions.  The one I'm sharing today becomes more meaningful as the years pass....

Today was the annual Harvey Girl Luncheon.  This particular tradition started 15 years ago (!)  My Mom-in-Law, 2 sisters-in-law, and myself decided to trade a few recipes at Christmas in 1995.  We traded names and made each other some kind of handmade cover for our new binders-soon-to-be-cookbooks.  Here's mine made by my sis-in-law Kari: 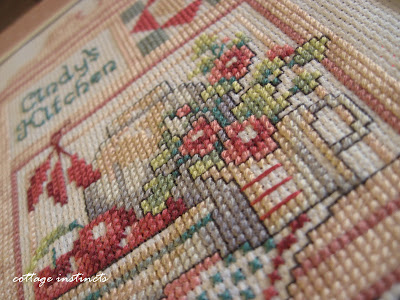 Over the years, we always brought a few recipes to the family Christmas get together, and our binder cookbooks began to fill up with meaningful recipes that each of us had grown up with or discovered that year.  We graduated from handwriting each copy to using our scary 'puters to print them off with savvy graphics and fonts. 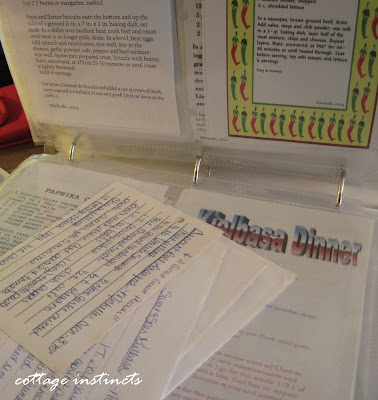 Many times, we'd add a personal note about the recipe (which gramma made it, a family favorite, etc.), or add a scripture or happy saying. Mom-in-law sometimes added a Christmas scripture. 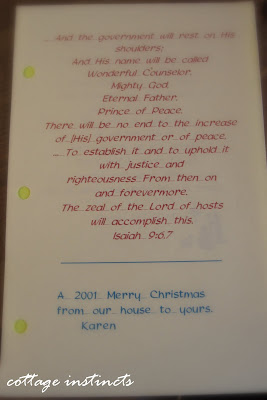 We wanted to use these cookbooks to get to know each other better, and hoped that it would someday be a conglomeration of the cooking histories of each of us as we melded together into the Extended Harvey Clan. 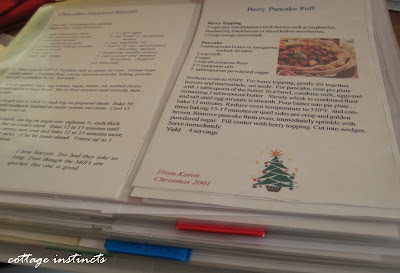 After a time, we began having a separate Christmas lunch at a restaurant where we exchanged the new recipes.  By 2006 or so, we moved the event to after the rush of the holidays.  My own daughter-in-law Andrea had begun to join us at that point, and I made a big binder for her with all the recipes and did a scrapbook-style cover of browns and silvers and blacks.  It was a great time of sharing and catching up. 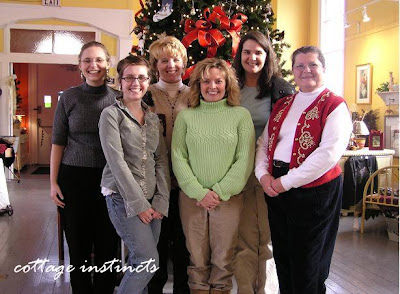 This year, we did something a bit different.  We decided to do a potluck and actually bring a prepared dish from the recipes we would be exchanging.  We all met at Karen's, and she set out her finest china: 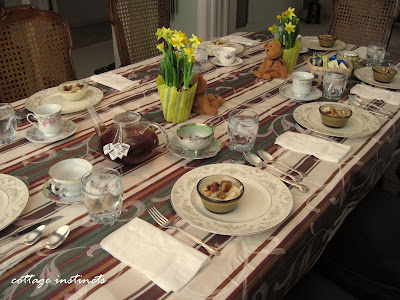 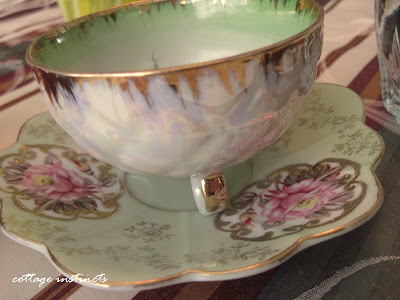 It was also the first time for my married daughter Maddie to join us.  I'll be making her book hopefully in the next week or so.  Yeah.  She brought Pepperoni Cheese Rolls: 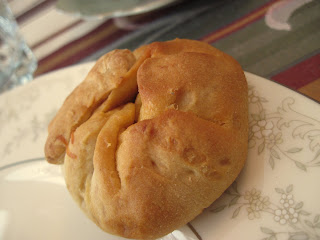 To go with my Daughter-in-law Andrea's Corn, Potato, and Cheese Soup (with homemade croutons!): 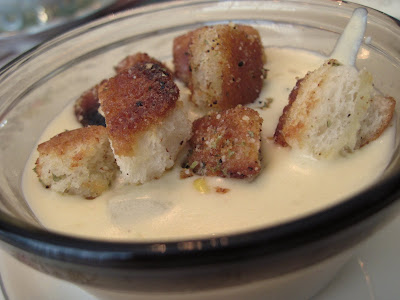 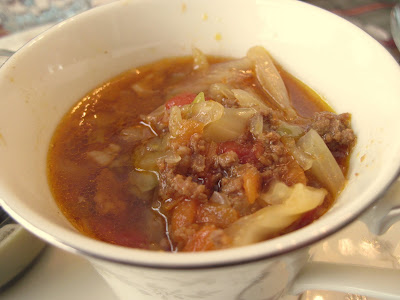 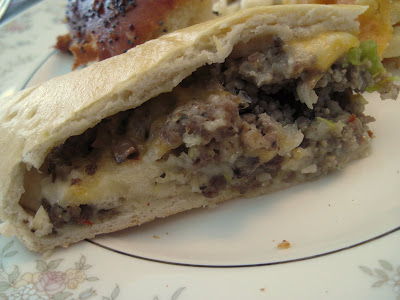 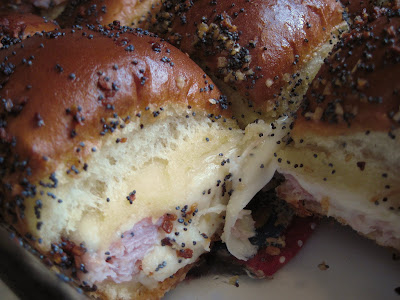 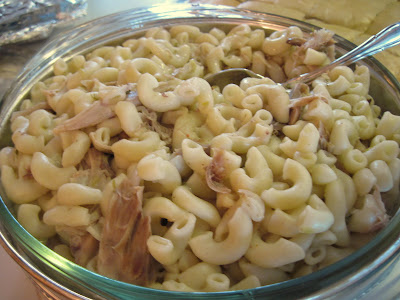 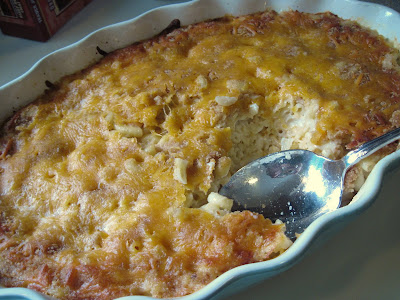 And Sis-in-law Kari brought Jon's Anniversary Chicken...he just put this together for them on their last celebration! 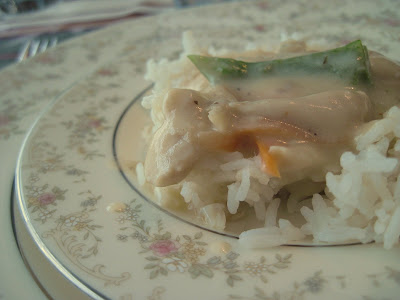 Everything was scrumptious...and I'm full enough to tide me over for the next 3 days (ok, maybe 2).
The other big change this year is to tackle an online version of The Harvey Cookbook 'cause we've gotten requests for these recipes from others in the family as well as friends.  I will be uploading all the recipes and pictures in the next weeks, so you'll be able to try them out too.  Who knows, if y'all want try one of the recipes and take a pic, we might add it to the site :)  I'll post the URL once we get it functional, but the official name will be:
Those Harvey Girls are Cookin'!
I hope you enjoy getting to know my extended family a bit by soon enjoying our treasured recipes.
Here we are this afternoon, a group of girly-girls surrounding a mother who had 4 wonderful sons! 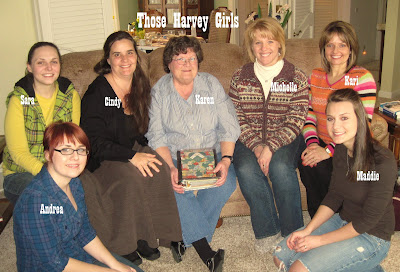 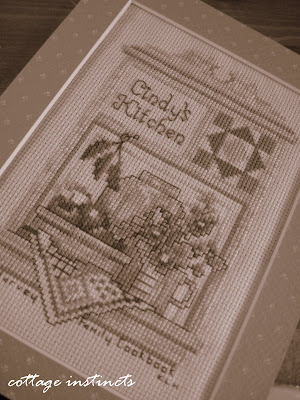 Email ThisBlogThis!Share to TwitterShare to FacebookShare to Pinterest
Labels: Babbling On, The Cottage Family

What a wonderful tradition! I think I should start this with my families... thanks for sharing!

What a wonderful tradition and a great way for your family to enjoy recipes and companionship.

Heehee.. this is a darn good post.. as the traditions screamed good food and great company!

I've recently had those mini ham & cheese sammie's and they are soo good I almost made a spectacle of myself by reaching for a 3rd one.

Love the cross stitching too.

Thanks Cindy as I love coming to visit.

I agree - What a wonderful tradition! All I can say is, I am starved after seeing all those wonderful dishes.
Enjoy your weekend.
Glenda

Your standby of mac and cheese looks pretty gourmet to me! What a great tradition, and fun time to catch up with all the gals!

Wonderful post. I treasure traditions, my sisters and daughters do to, we may have to copy your grand idea. Thanks for sharing.

What a wonderful tradition and project! Oh, how I wish I had daughters to start a great tradition like this :) -Tammy

What a great party and tradition. I think I got full just reading through :)

If I lived closer, I'd offer to be your official taste tester! (I'm sooo not into cooking, but after looking at those pics, maybe I should)

Wonderful tradition and a great reason for the girls to get together. Lucky you!

THAT IS A GREAT IDEAL.. WOULD LOVE TO DO THAT WITH OUR FAMILY.. YOURS LOOKS SO GOOD!! ALL THE MEALS LOOK LIKE THERE OUT OF A MAGAZINE! THANK YOU FOR YOUR GREAT POST!

Cindy, let me start by saying you have such a wonderful family!!! I wish I had a bunch of cookin' gals in my family!.... I love that sausage roll, it's our 'brunch' staple, but I only make it a few times a year (double batch, of course!) THat Russian Cabbage soup looks so yummy, well- everything does. I think I just gained a few pounds reading this post!!

I am looking forward to more... Take care!!

Aww, Cindy! They are awesome! And I am green, cause my (and hub's) family has become so disjointed. I will try some recipes when you get them posted and maybe you'll adopt me?! I could be the eccentric old aunt who's a tad off her rocker! Which of you claims to be the BEST cook?!

You are sooooo lucky to have family close enough to have this kind of tradition. What fun!

What an awesome tradition! I only have one sister - - - the luncheon might be a tad lonely!

That is such a unique and special tradition! Thank you for sharing it with us - and planting an idea. :0) The food all looked really yummy!

Cindy this is a lovely tradition that you Harvey girls have created and I look forward to joining you and trying out some of those great looking recipes.
~Maggie~

What a wonderful tradition! Wish we had done something like that in our family... The food looked delicious!

How lucky for your mother-in-law and for you! Famitly is a wonderful thing..and the food looks like it should be in Gourmet magazine.

... only in Indiana would you find chicken and noodles at a sit down dinner party ... it was a staple in our house ... served up, always, with homemade applesauce ...

Girl, this is flat out awesome. I love everything about it. Well, except the fact that I'm not part of it! Poo! How old is your available son? Too young for me I fear....

What a great way to *build* traditions and family...looks like so much fun!
Rene'

Great tradition Cindy and I can only imagine how yummy that pot luck was!! We got together a few years ago and made a list of our Grandmothers recipes that we all wanted. I finally have them all typed up and are calling it "A History in the Baking". I just have to get it formatted and sent to the printers...at some point and time. It is actually on my list of things to do this year! I want to put ours on line too and now maybe I will move a little faster on it.

What a great family tradition that I'm sure will be carried on for many generations! Looking forward to that recipe for the ham sandwiches - they look so good!

Oh Cindy...What a sweet history you all are creating! Yes! I will be looking forward to your online version!

stumbled upon you and this post this afternoon and found it so wonderful that I may have to start the same tradition with a few gal pals.

you inspired me today - aren't blogs wonderful that way?