In Which The Kooky Lady conquers Chicago then meets The Coop Keeper.

Well I survived my trip to Chicago, and on the way home, I stopped by Jayme's to meet her, Aaron, Glen and the girls.  I was all in a dither with excitement.  My camera didn't behave AT ALL, so I'm only gonna post the ones where humans are recognizable, and chickens look like chickens.


So let's begin at the beginning.  Here's what went down in the Windy City.
Anticipation..... 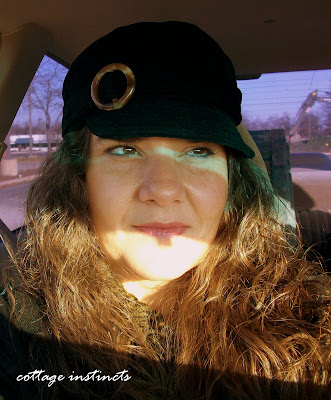 After a few hours, the Windy City appears on the horizon. 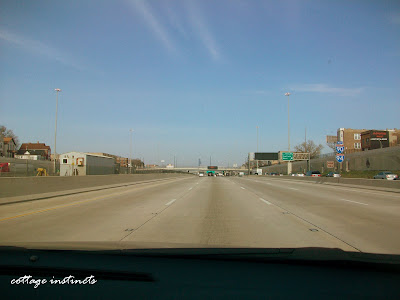 Even though I'm white-knuckling the dashboard, I am able to sneak in a few shots of the Sears Tower.
Can someone explain why I can take a clear picture at 60 MPH, but holding completely still, I get blurred messes?  Grrr..... 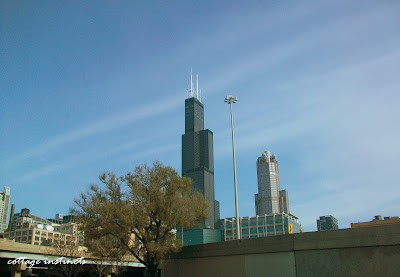 Ok, the Sears Tower and Chicago Skyline are great and all, but THIS is what I'm talkin' about! 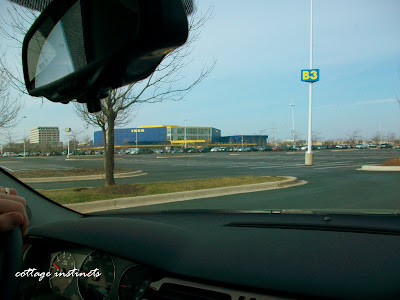 Ready to roll.
Cool as a cucumber on the outside, with heart palpitations from the excitement just waiting over my shoulder. 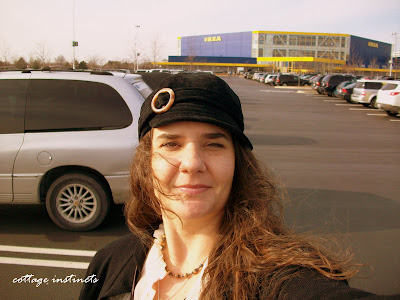 We spent half the day at IKEA with the entire population of Chicago joining us, then they followed us over to the Woodland Mall, where I had an out-of-body experience at Anthro.  Their prices, by the way, are nothing short of ridiculous, and 'though the displays were to.die.for, lots of the home stuff they sell can be easily replicated by all you crafty bloggers.  But yes, the displays knocked me on my tushie.  They could make a lump of petrified dinosaur poop look trendy and hip.
Next morning I got prepared for my day on the Miracle Mile.  Don't I look cute?  I heart my hat...and hubby picked out the black wool coat for me. 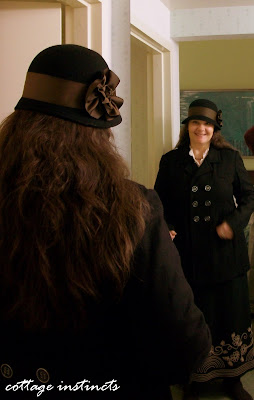 Coming out of the hotel we were greeted by this: 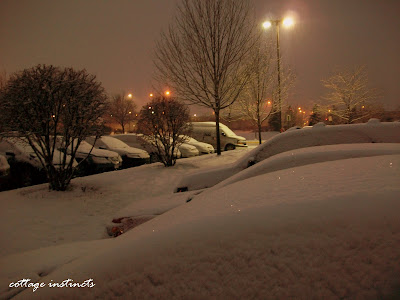 ...which turned a 24 mile trip to the city into a 2.5 hour slug race.  I could've walked downtown faster.
I was cheering on the sun as she put on a brave show, but she eventually succumbed.... 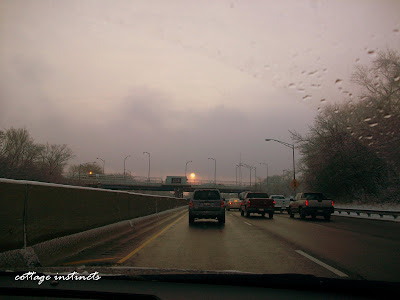 ...and left the top half of the city in a cloud of blah. 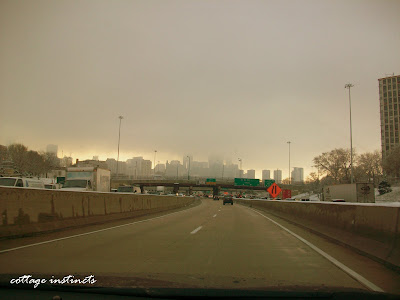 Hubs dropped me on Michigan Ave and hurried on to his business meeting.  I was ready to take the shops by storm.....except they didn't open for an hour and a half.  (forgot the time change.)  So I took some pictures to pass the time until frostbite threatened to devour my appendages. 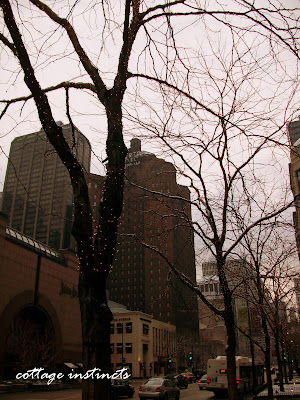 Obligatory shot of the Water Tower with J.Hancock behind to the right. 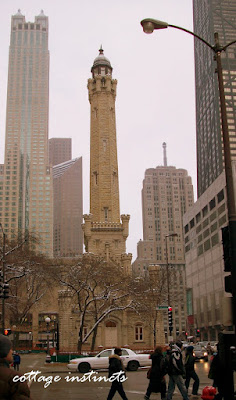 Check out these window displays at Tiffanys....that's intricately cut paper around each of the windows.
Sparkly butterfly pin. 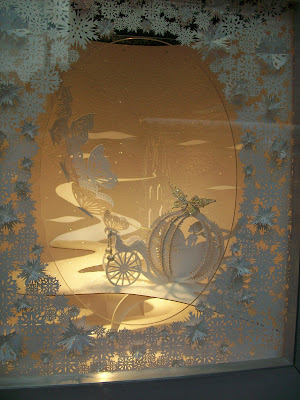 Diamond rings 'round the reindeer. 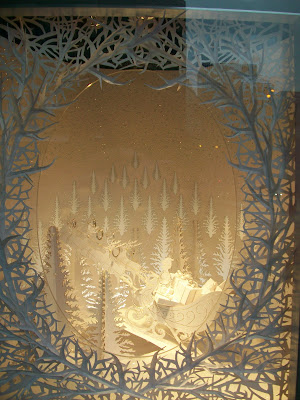 Diamond bracelet around the tutu with a matching set of diamond studs. 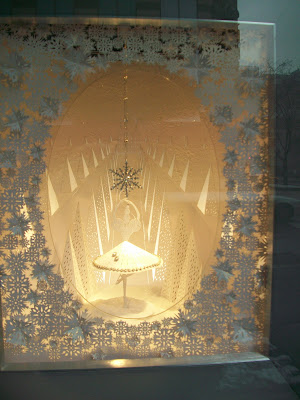 My only purchases were at Crate and Barrel and the Marshall's one block west.  I honed in on these tiny ornaments which will play nicely with my aqua crackled glass balls I got at Restoration Hardware last year. They're the size of my thumb.  Which is small.  As thumbs are.  Most of the time. 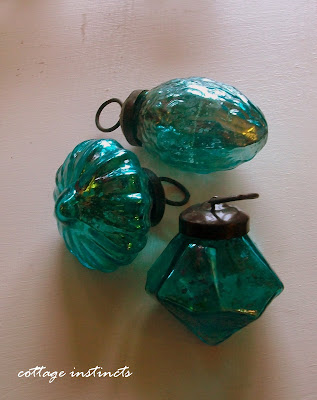 The tiny tree ornament is one of 8 I got to stick in kids' stockings.  They got home from school before I could snap pics of the rest....the taper holders were el cheapo, and I thought they'd make pretty bases for some tall vases. 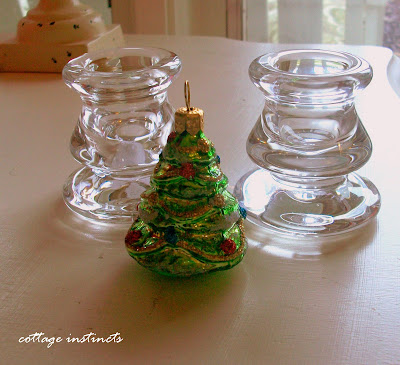 Lastly are these totally wicked cool miniature lantern ornaments.  I was squealing like a pig when I found them.  Several ladies quickly moved out of the way.  It wasn't very becoming, but who cares when such awesomeness is within reach? 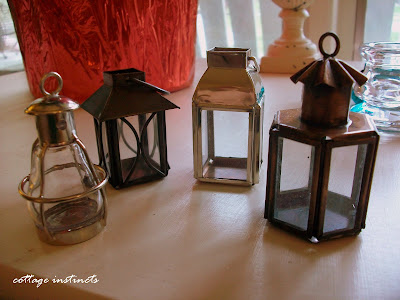 I mean come on now, are they da bomb or what?
FINALLY.....on the way home, we drove down to The Coop Keeper's place!
We promptly went out to meet the girls... 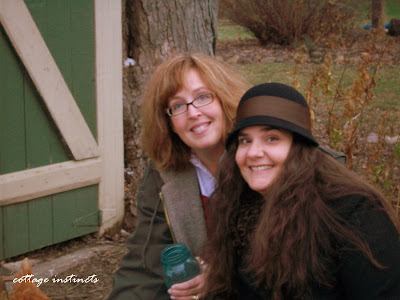 When they saw us coming, they promptly ceased their gossiping (I overheard just a snippet about the big black chickens who refuse to identify as male or female....and it sounded really scandalous).  Mother Plumtree and Mrs. Puffington immediately threw aside their current knitting project (they're making stockings for each of their coopmates and adding monograms on burlap for tags....they're really into the current burlap rage and follow the Shanty2Chic sisters religiously) and came running to greet us. 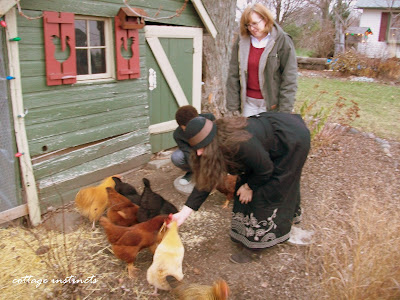 They were just so welcoming and happy to see me, and I'm sure it had nothing to do with the cracked corn and grain we had. They were all like "OMGosh!  It's the famous blogger who gave us our break into fame!  She looks cute!"  Fifi was totally all over my hat, and Scarlett asked where I got my linen skirt. 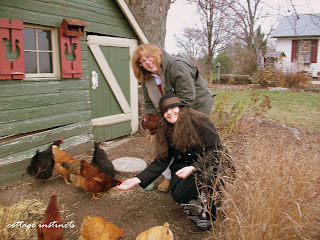 Scooter wanted a shot next to me, so Jayme accomodated.  I also got to touch the sacred feet of Stubs, whose artistic pursuits are becoming so well known these days. 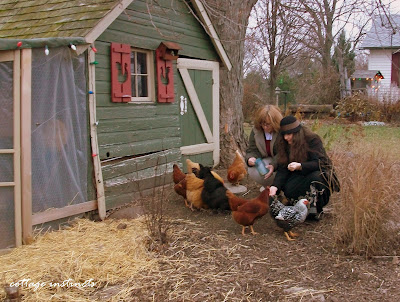 There's beautiful Helen adorned in black and white, who coordinated perfectly with my outfit don'tcha know, though she was concerned with how worldly I looked after my day in the Big City.
She asked if I had any prayer needs, even though she herself was limping and her one eye was closed, poor thing.  Always thinking of others, that Helen.
I got a tour of Jayme's beautiful farmhouse all decked out in lights and christmas cheer...and I'm told it will be adorned with fresh greens and rosehips soon. There were newly-born gingerbread people  just out of the oven too.   Aaron was also my tourguide, and is seriously the cutest thing I ever saw.  I'd like to take him home with me so he can teach me to cook.  Jayme's hubs Glen and my hubs Chris chewed the fat while I went from room to room ooo'ing and ahhhh'ing over all her decorating and antiques.  She's like the queen of curbside gorgeousness....side tables and dressers and cupboards, and Glen even makes furniture!
(I will not covet, I will not covet....)
I enjoyed some of her famous Nipples and a cup of tea, and she gave me a bag of them for the car ride home along with a gift from a few of the girls: 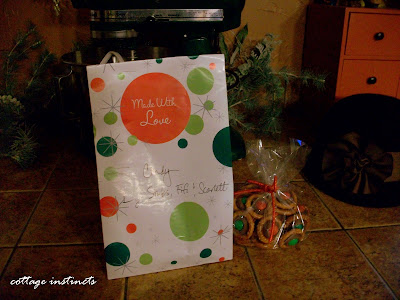 I love that it says "made with love".
Can you guess what's inside? 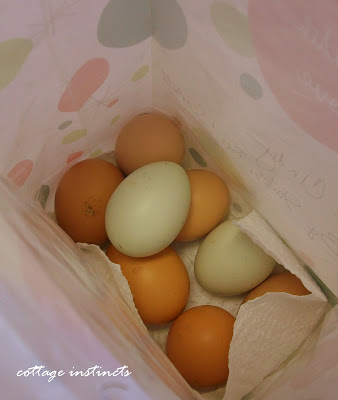 Precious cargo indeed!
The visit was way too short, so I'm planning a much longer trip next time, and I can't wait!  I love that blogging has brought Jayme into my life.  She's a riot, so down-to-earth, and the picture of a happy homemaker.
So that's my tale.  I'm still going thru the links from the party yesterday, and will get a highlights post up in the next day or so....I'm so, so, so behind on crafting (ok, and cleaning and laundry).  Hope you're all gleaning tons of inspiration from all the bloggy parties happening this season.

Email ThisBlogThis!Share to TwitterShare to FacebookShare to Pinterest
Labels: Babbling On, The Coop Keeper, Who's Got Instincts?

Cindy, I LOVE, love, love your outfit, hat and skirt, what a cutie you are. Cindy's excellent adventure! I was enraptured the whole way. Thanks for the great trip!
hugs,
Debra

Oh, somehow you've managed to take us with you and it was an awesome trip! You looked like quite the 'doll' in that precious outfit! Glad you are home in blogland now too!

Sure enjoyed my trip with you ... can we do it again sometime soon? What a wonderful time you had ... Your pics are fantastic!

Please join me at our new blog ~
blushingrosetoo.blogspot.com

Do not know how long the old one will hold up.
TYSM ~ Marydon

What a great time you had! I love Chicago - my niece had her wedding reception in the Sears Tower - pretty spectacular! Love your photos of the trip1

Hi Cindy! I just LOVE your pics from Chicago, and the description of your day. I also loved your visit!

Now ya went and posted pictures of my place that I never show people...you know...the UNDONENESS. :-) I'll forgive ya though.

Looking forward to many more fun times. The girls have been clucking non-stop since your visit!

How fun! What a great trip, lucky you!

You were here! In my town. I live 10 minutes from both IKEA and Woodfield Mall. It certainly looks like you had fun.

I enjoyed every moment of your trip! Thank you for sharing, Cindy. Awesome that you met Jayme and the gang too. Fun times! Great pictures! -Tammy

Loved the outfit, you, where you went, Jayme, the chickens, the eggs, the lanterns, the snow, the story, the continued friendship to come...

I totally agree. It was like coming along for the ride. Thanks for sharing with us!

Sweet home Chicago! Do not miss the weather there, 'cause I'm having some of it here! Sounds like a great trip, with nice photos. The Tiffany window is so pretty.

Thanks for the tour! I have never been to Chicago. Looks like you had a fun visit with The Coup Keeper and her Girls! Thanks for sharing your mini vacation.
I am having a Giveaway - be sure and drop by.

Sounds like you had so much fun. Love the outfit and the chickens too:)
~Debra
Blog: The capers of the vintage vixens