I've been researching camera options since we got our $150 canon earlier last year.  It takes horrible pictures in 'auto' mode, and though it's fine for the blog, I'd like better quality for family pictures.  I've read up on cameras from about $400 down to $200 as that's our budget.   Here's what I'm going to look at today: 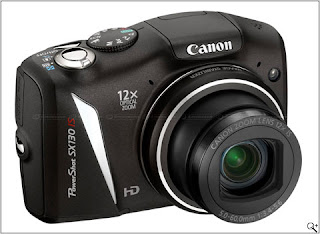 Anyway, in doing so, I've also been reading photography blogs and forums, learning about the settings Canon offers.  One of the most helpful has been Ken Rockwell.  He gives easy to understand, common sense advice on using both dslr and p&s cameras. 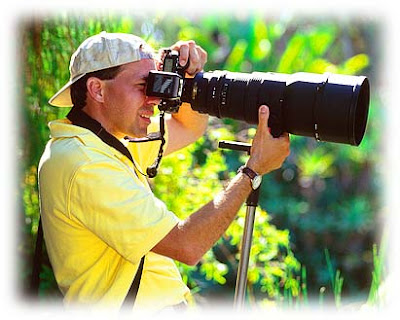 Several of the things I fiddled with today were the Flash and Exposure settings.  I've read on most blogs to turn off your flash when taking indoor shots, and I've had reasonable success doing so except in my family room.  I got a cheapo tree lamp with two lamps, and one of them promptly fritzed out. It's useless now, but before I decide to go replace it, I was curious about whether just using different setting with my in-camera flash would produce the same kind of shots  for family photos (so I don't have to haul out a lamp tree everytime I want to take a picture for non-blogging!)


I used Ken's preferred default settings for my canon this morning....
Used a tripod. ISO and White Balance were set to 'auto', and I used the 'vivid' setting.
I did these in the darkest room of my house, with an overhead light and small side table lights on.  It's a cloudy winter morning out of the only north facing window in the room.  I didn't touch these in picasa or any other editing program...these babies are straight out of my camera. 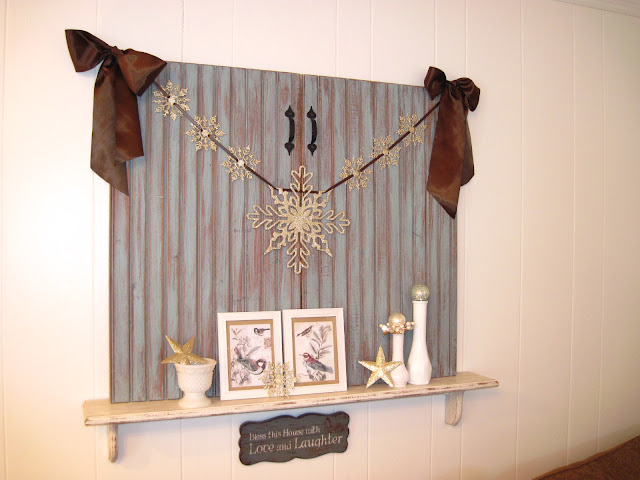 Next I just moved the exposure to -1 which darkens the flash a bit: 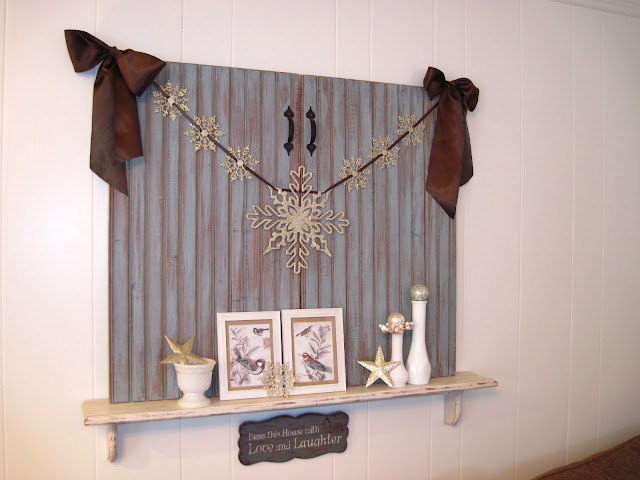 Then I moved the exposure all the way to -2, which I think gives the best result. 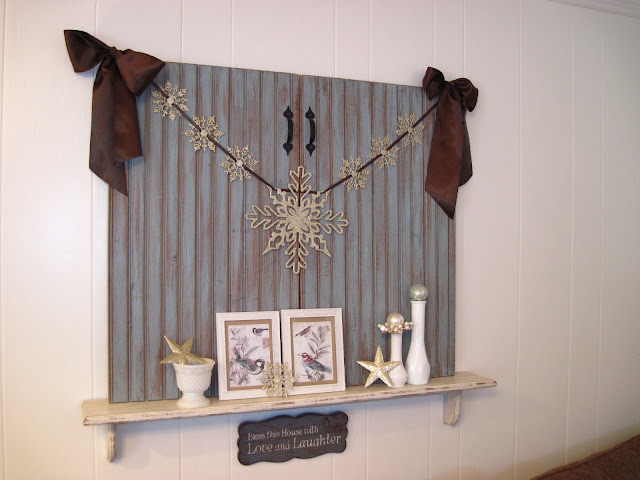 This next set is without a flash.  First, exposure set to '0'....very similar to the above shot using the slow synchro, but cooler tones.  I like the warmth the flash gave better, but this is pretty good. 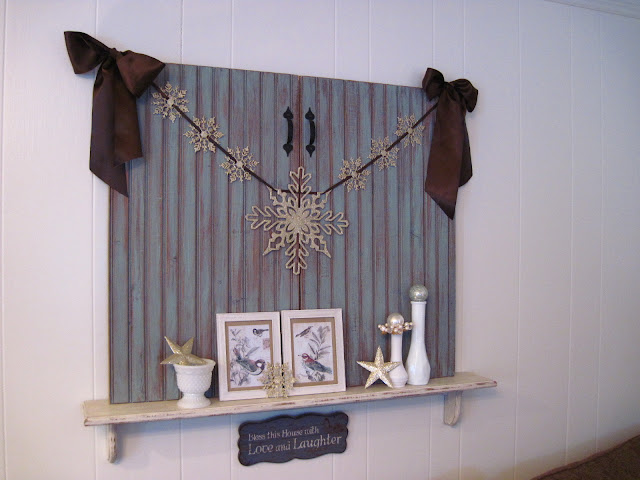 Then I moved the exposure up to +1...overexposed for sure. 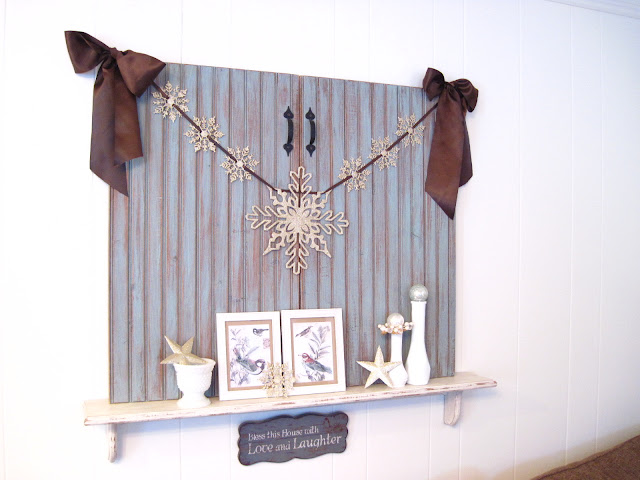 For funsies (pull out yer sunglasses), here's no flash and +2 exposure: 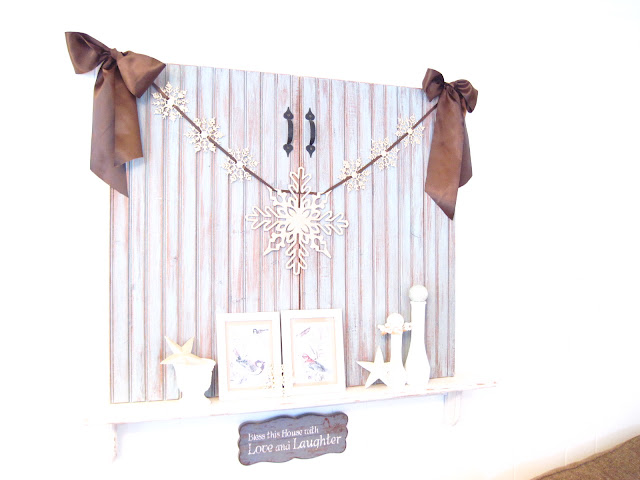 Lastly, I set the camera flash to 'ON', to see the difference between the regular flash and the 'slow synchro' flash.  This is exposure set back to '0' again.  Compared to the first shot I took, this is much more harsh and greyed. 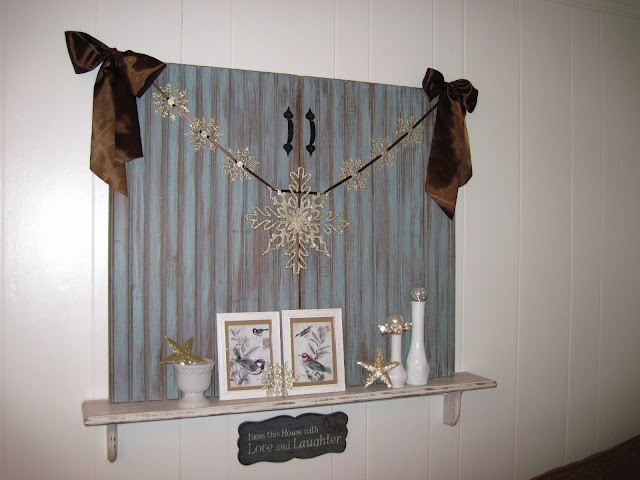 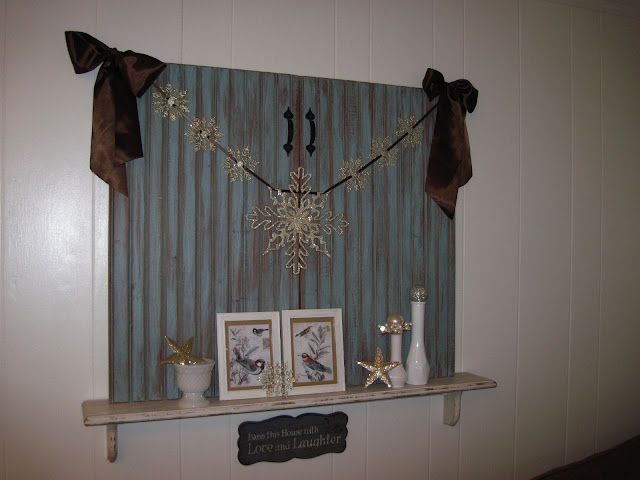 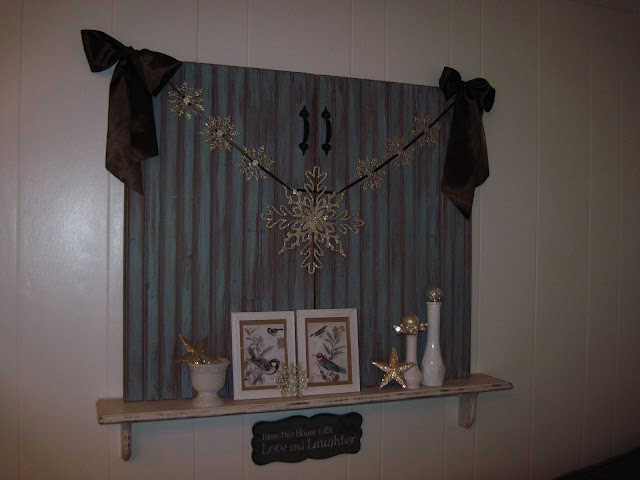 So, bottom line for shooting in low light without a lamp tree:  Try the slow synchro setting.  Ken says the slow synchro is best for getting background brightness indoors (slower shutter speed).  I agree.  He also says the trick is to get the flash to match the ambient light already available, and using the -2 exposure setting with the slow synchro gave me the best match (this is what Ken uses as well).  I could actually see this on my LCD screen.  Different times of the day, or changing the lighting in the room would necessitate using different exposures.  One note:  Ken also uses gel filters, which I may experiment with as well, even on my wee in-camera flash.

Next up I used my Macro setting.  I did the same grouping of shots as above: First used the slow synchro and  fiddled with the exposures. Here's '0' exposure: Nice shot, but too 'flashy' for my taste I think.  Would prolly depend on the subject (ie: less glitter and gold might respond well to the warmer tones of slow synchro). 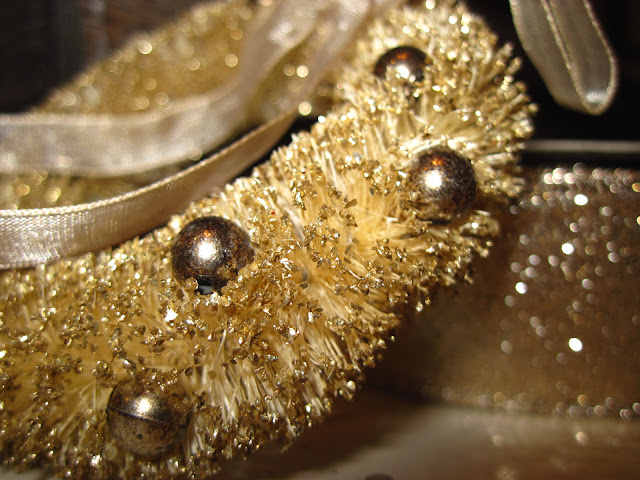 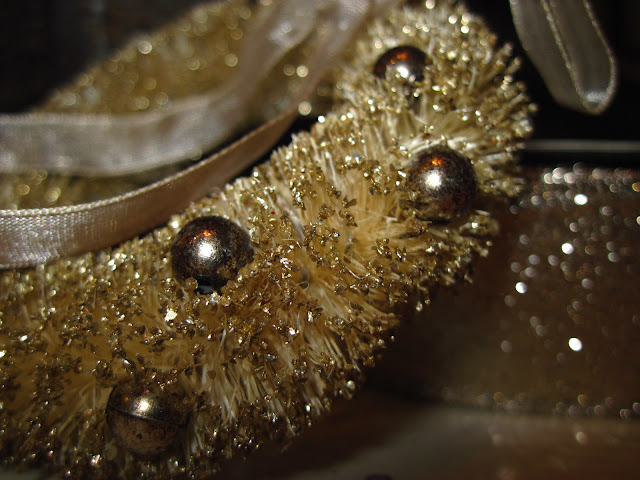 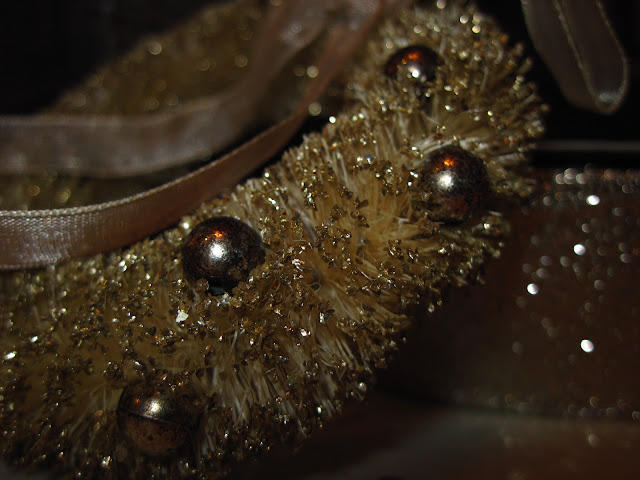 Next I shut the flash OFF.  Exposure back to '0'.  This is the best setting for Macro IMO, as you'll soon see: 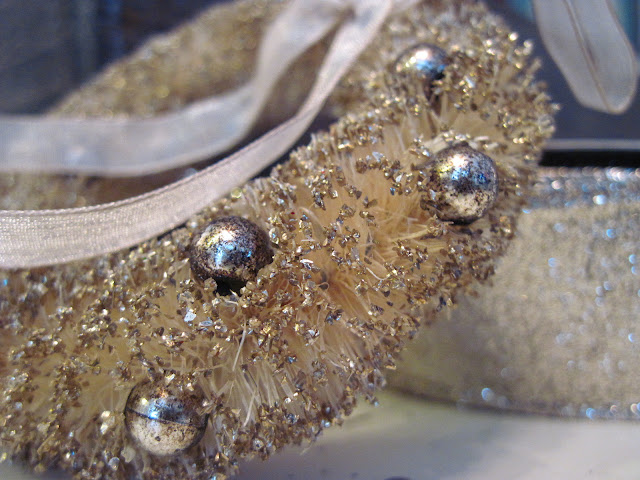 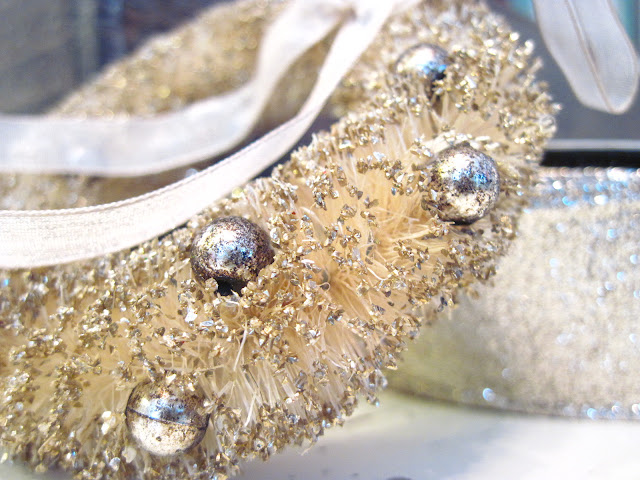 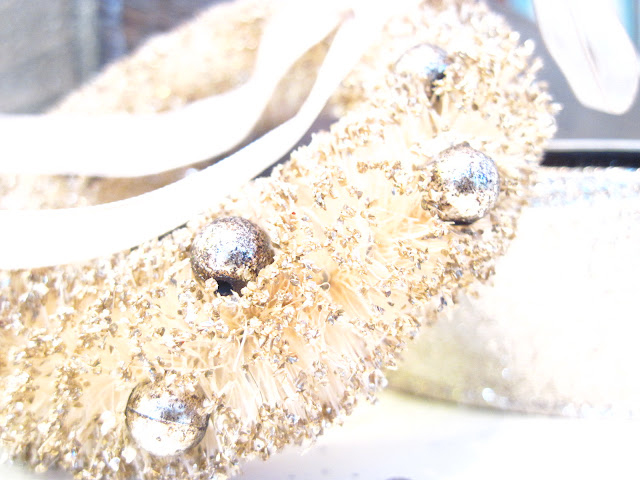 Then I turned the flash on, started back at '0' exposure...pretty standard type of shot seen on many blogs. 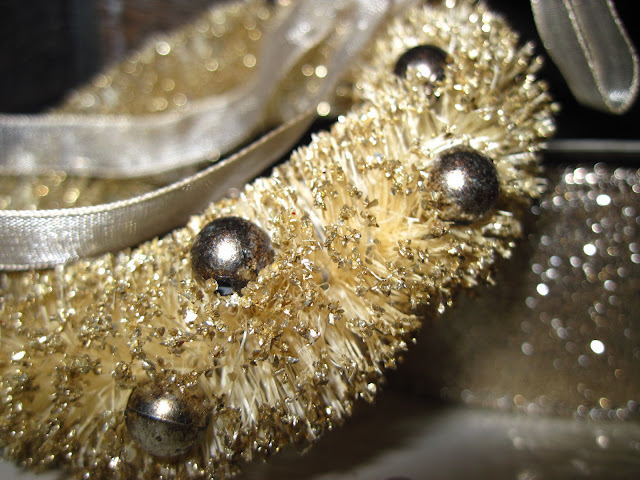 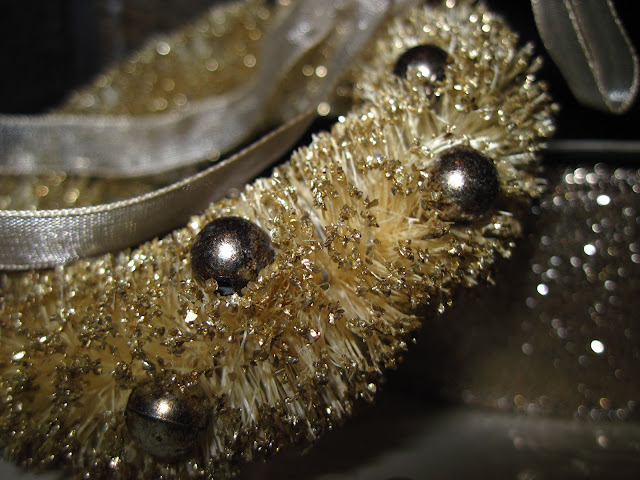 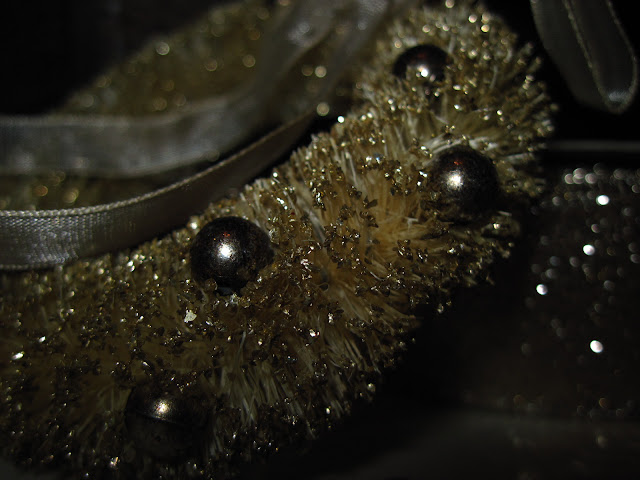 So for macro shots, no flash, exposure '0'.  Maybe a +1 for an artsy shot.  For cooler toned subjects, the slow synchro might work as well.

Ok last round of shots is at my camera's wide angle and about 15 ft from the subject matter.  Again, starting with the slow synchro flash and '0' exposure: 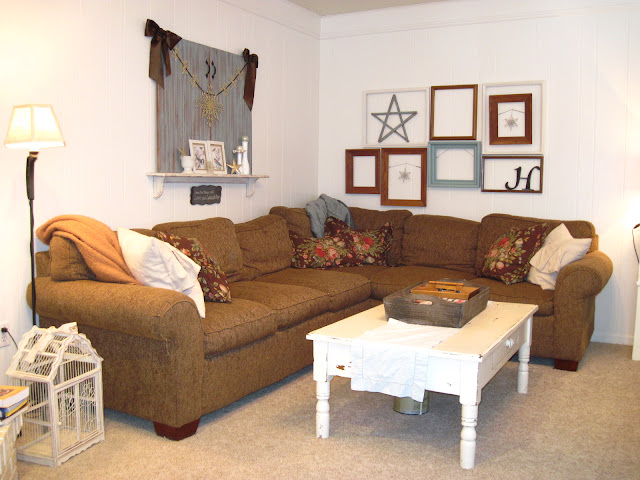 Darkened the exposure to -1: 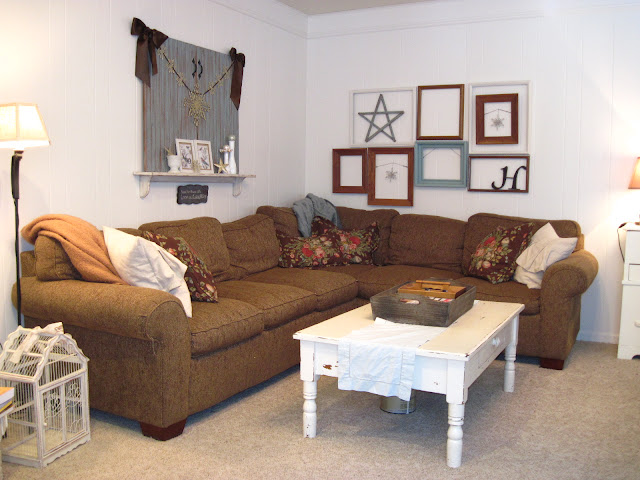 Then darkened to -2: Again, as in the first grouping with the beadboard doors, this setting is my favorite. 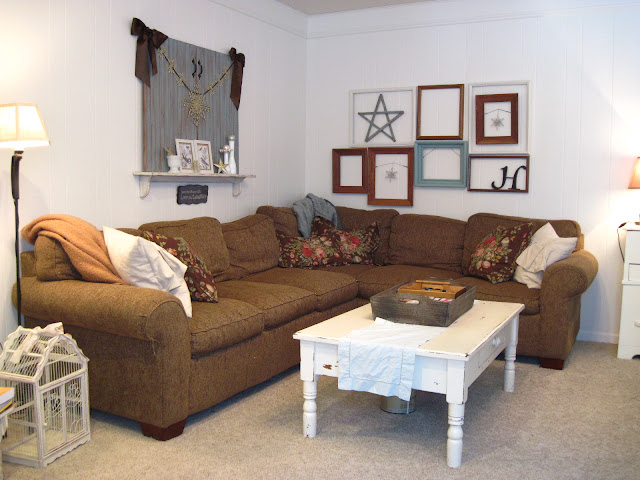 Next, flash OFF, exposure back to '0': And again, like the door pics, this is a decent shot, but I prefer the warmness the slow synchro addes to the pic above. 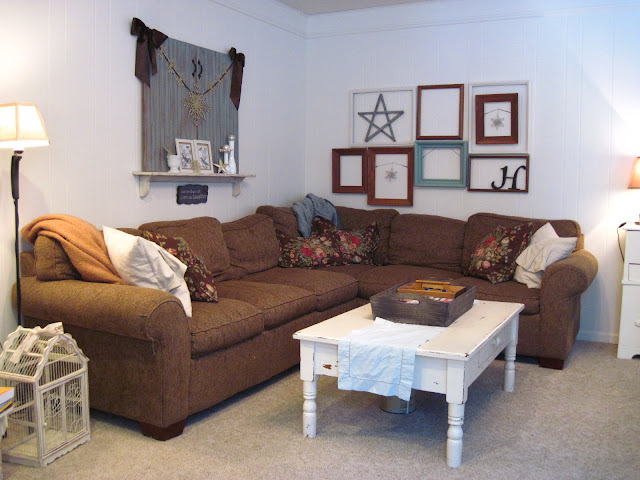 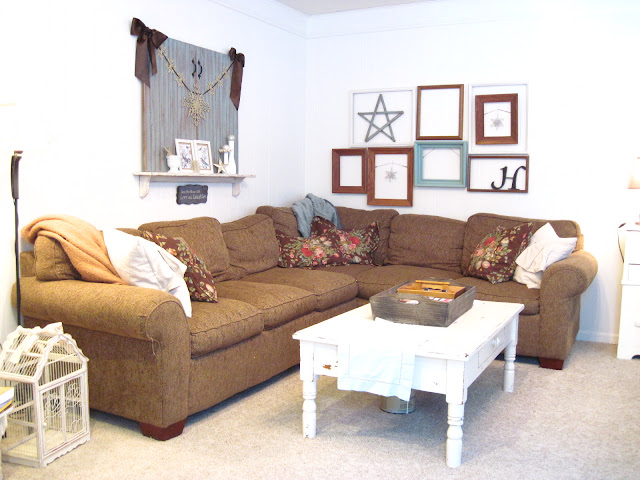 Get out those sunglasses again +2: 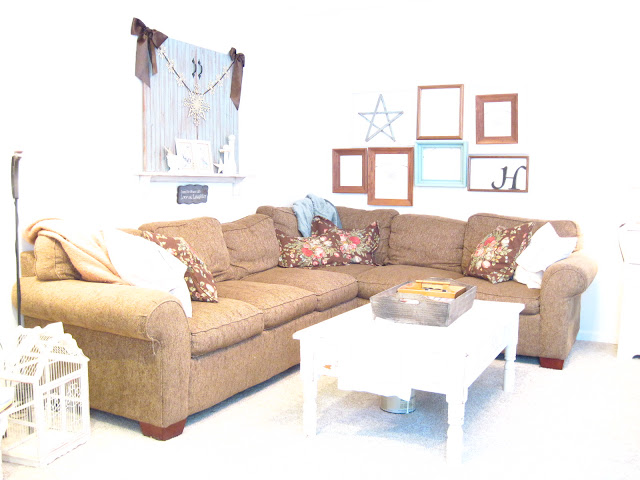 Finally, set flash to regular ON.  Start back with exposure '0': Harsh and greyed.  Also too dark. 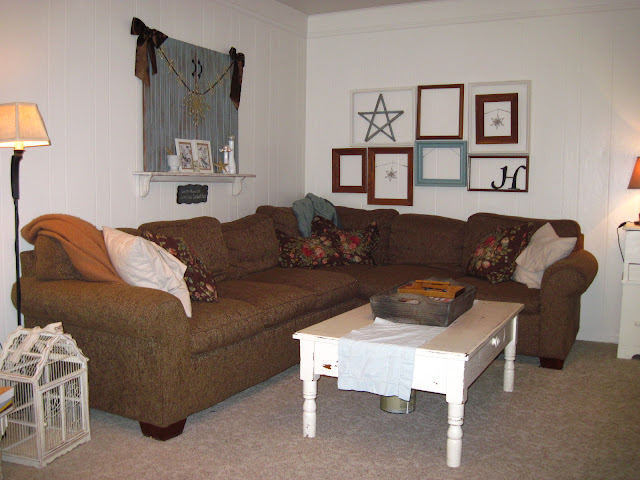 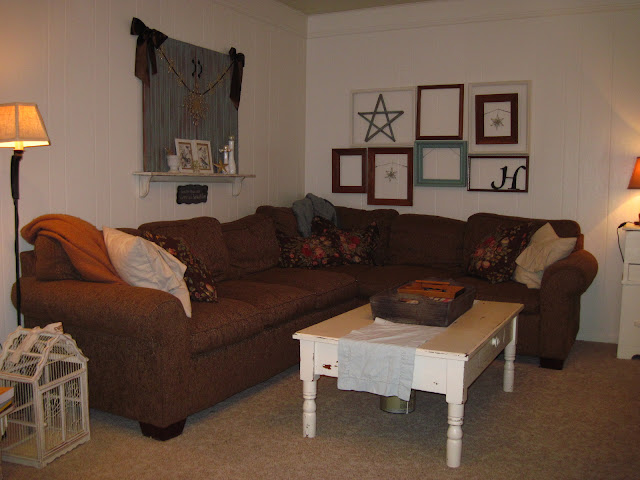 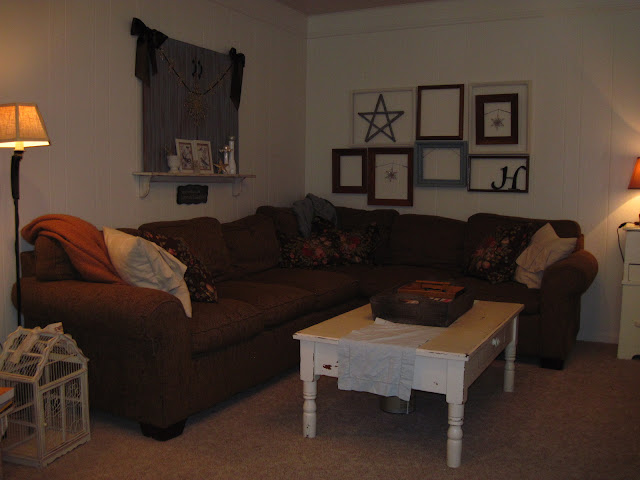 So what did I learn with these experiments?
That I'll be using the SLOW SYNCHRO flash option and a -2 exposure for low light, indoor shots of family in NORMAL mode.  Regular flash=bad pictures.  0 flash=iffy shots unless you're in macro mode and your subject is warm-toned.

My next experiments will be playing with White Balance.  Do you find this helpful?  Of course everyone's camera is different, but this gives you an idea of what to start fiddling with first to get better pics for your family and blog.

Thanks for the tips and the examples of each! So helpful. I just ordered a new lens for my camera so I can hopefully get some better shots in low light situations. I'll have to refer back to your tips when I start playing around!
Have a lovely weekend!
xo Autum

I normally shoot in aperture priority. I have also learned to up the iso. I never use the flash since you can go in an edit exposure. I love picnik, it's a great free online editing tool. I learned how to 'bokeh effect' last night. Fun stuff! Have fun shooting!

Heather @ The Other White House

Thanks for the tips! I'm going to try these this weekend!

Lots of great info! I need some time to explore his site and learn some more. Thanks for passing it on. I'm always up for learning and sometimes it takes going to different sites and reading different version on how to accomplish something for it all to click in my little head! I will all of a sudden get that Ah Ha moment :)

If these pics are straight out of the camera with no software photo editing, they are AMAZING.

I have much to learn. I need to go check out his site! Thanks Cindy.

wow! Maybe I should look at my settings...wait...do I even HAVE settings?>{ I can't believe how different each picture looks...and..by the way...you are a pretty good photographer! Hugs-Diana

I want a better camera. I don't even have settings on mine.

It's amazing that some of those came straight from the camera. You made it all sound pretty simple, too. :)

I guess I'm just too lazy or stubborn to play around with my camera. I never use flash and do the automatic thing. Like I said, lazy.
Brenda

I need to play with mine like this! I haven't been doing that enough lately, and I forget about different settings!

*GREAT* post, Cindy! I would love to hear more about your photographic experiments. Between you and Donna, I might just learn how to take decent pics with my Canon p&s. :) Thanks!

I have just purchased the latest Nikon D3100 SLR and I must say for my first real big girl camera I am loving it. I have enrolled at the Nikon school for a full day of learning to use my camera properly. I have played around with mine and discovered many things very similiar to what your talking about but I think a course would be benefical to say the least. Love your blog. Sandy x

Hi Cindy, Great post! I know absolutely ZERO about photography. As a matter of fact, if you asked me what kind of camera I have, I would answer "a pink one"! Seriously.

I really appreciate how generous you are with information! Thanks so much for sharing your knowledge!

P.S. I love your Christmas tree....I don't think I commented on the post itself!

WOW! Have you been staying with us during the past week?! I mean I am over here taking hundreds of pictures trying to get this lighting thing right. Playing with settings. Looking at the pictures and comparing. And then you do this post - your timing could not have been better. Well unless it was before I took 50,000 pictures ;) Seriously, thanks so much, this is a big help and I'm going to go check out the site you recommended.
And of course I'll be reading your next post!

I always shoot in AV mode and alway, always, set my exposure, white balance and ISO before each "shoot" - what a difference. I never use flash - and if I do, I cover it with a tissue or coffee filter to soften it. I've had my SLR about 3 months and still learning! Think we have the same couch by the way :)

If you get a camera with AA batteries it will weigh more than the ones with the rechargeable battery. A second backup battery is not expensive at all. I love my Nikon... but of course I use it for a different purpose than you will. Happy hunting. karen

Wow, girl. Lots of info. I need to do a little research on my camera. I have all kinds of things I could tweak and do, but I don't have a clue how to do them. Maybe I will be challenged now. Thanks.

I just filed away my camera info (Cannon G10). I've had it out and trying to get to it on my desk for about 2 years! I was thinking I was happy just to get the photos taken but, now you made me want to figure out a little more what the heck I'm doing and do it better.

I'm totally going to be checking out his tips and all - it's just so overwhelming to me - oh look a squirrel! See - that's what happens whenever I try to sit and work on learning my digital camera. And this from the girl that went to COLLEGE for photography in 1981. Might as well been 1881 with all the new technology!

Thanks for all of the tips! I'm going to have to be sure to try some of these myself.

I'm always a bit scared to change any setting on my camera but obviously they are there for a reason!

I really found this post useful. Thank you for taking the time to post so many takes of the same shot!

I'm getting a new slr for Christmas, upgrading from a p&s...I'm very excited but slightly daunted!!

I really like the +1 overexposure on your wreath shot.. very pretty!
I've been tinkering around with these same settings on my Kodak pns, too. Makes a nice difference. I'm going to check out the ken link. :) Thanks for sharing~ great read!!!
Hugs Lara